It is a small toad that was once considered to be one of the most colorful amphibians. It is believed to be an extinct animal.

The toad reportedly weighed around one ounce.

This toad had a very reticent life. Naturally, not much was known about the Golden Toad behavior. Animal researchers only have a clear idea about the breeding behavior of this animal.

Was Golden Toad an Amphibian?

Yes, it was an amphibian much like toads of other species. It could survive on both land and water in Monteverde. 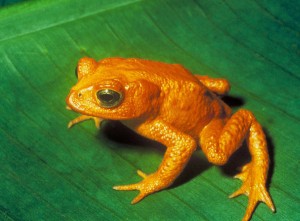 This creature was first described by zoologist Jay Savage in 1966. But the Golden Toad population dropped very suddenly since it was discovered by Savage. From a few thousands in 1987, its count sharply dropped in the subsequent years. Only one male toad was observed in 1989 looking for a mate. This is believed to be the last toad of this type to have existed on Earth. No more of this species has been found anywhere since May 1989.

This species suddenly became rare. Only 10 such toads had been found in 1988 and just a single was found the next year.

As aforesaid, it is supposed to be a member of extinct species of animals. The creature has not been spotted anywhere in the planet since 1989. This has led the IUCN (International Union for the Conservation of Nature and Natural Resources) to declare this species of toad as extinct.

Male toads usually had a longer snout than females. The snout was also more pronounced in males. Males of this species had long, proportionate limbs. Both male and female toads had a comparatively smooth body surface. These toads did not have any vocal pouch or slits. The hind toes of these toads were webbed at the point of their origin.

The secretive life of this creature also left little information about Golden Toad food habits. But the size of the animal makes most guess that it fed on smaller invertebrates. The Golden Toad diet is also said to have comprised of insects.

Golden Toad mating season began during the start of the monsoon season from April to June. When the Golden Toad breeding season arrived, these toads were seen to gather in many numbers in water-filled holes or small pools located in forests. Males were generally more in number than females which led to tough contests. Each of the male-female toad couples produced anywhere from 200-400 eggs each of which had a 3 mm diameter. The larva remained in the pool and took about 5 weeks to mature.

How Did Golden Toad Become Extinct?

The extinction of this species has been mysterious and it is not clear what led to its disappearance. However, human activities have been primarily blamed for the extinction of this creature. Deforestation activities by humans may have destroyed the habitat of this species. For Golden Toad climate change caused by fossil fuel combustion may also have contributed to the disappearance. The sensitive skin of these amphibians may have also made them vulnerable to ultraviolet radiation and pollutants. Amphibians are extremely sensitive to changes in the environment.

A kind of fungus has been recently discovered and is said to be killing amphibians all over the planet. This microbe, known as Chytrid Fungus, is also supposed to be a reason behind the extinction of the Monteverde Golden Toad. But it is not clear whether this pathogen was responsible for extinction of this toad.

These toads were known to reside only in a small 4 square kilometer region in the Cloud forest close to the mountainous Monteverde in northern Costa Rica, Central America.

Where Was Golden Toad Discovered?

This creature was discovered in Monteverde. Despite research expeditions, it has not been found in any other forest or hilly region of the world. In 2004, it was announced that since golden toad discovery the population of this creature had dropped drastically and it could surely be declared as extinct.

It is said that this amphibian was already an endangered species when it was first spotted in 1966. Absence of immediate conservation failed to check Golden Toad decline.

Serious attempts were made to conserve this toad. Cloud forest, where this toad was found, was protected by the Monteverde Cloud Forest Preserve, a privately owned organization. But efforts could not save the toad from extinction.

Being an extinct animal, it is difficult to spot this creature. Here are a few Golden Toad images that will let you know about the appearance of the amphibian. Check out these Golden Toad pics to know how the animal looks like. 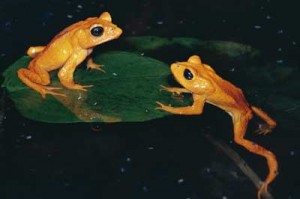 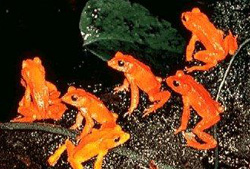 Some researchers, however, have an opinion that these toads have not gone extinct. They have only gone into hiding and waiting for the right environmental conditions to resurface again. Their mating zone is still protected with the hope that they may return again someday.