The Blue-tailed Skink, also known as the ‘Shinning-skink’ or the ‘Christmas Island Blue-tailed’, is a species of skink that is indigenous to the Christmas Island of Australia. Historical data have revealed that, these humble, non-poisonous reptiles were once feral and widespread throughout the island. Though, from around the late 1980s, these creatures started to decline in numbers across the Christmas Island. 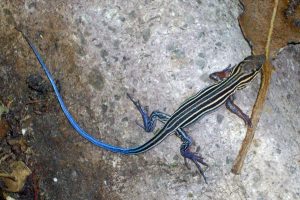 Although, extensive studies and surveying are still on across the Christmas Island, but presently, there was no evidence of any wild populations. However, it is quite possible that, undiscovered populations still exist since Christmas Island has vast stretches of furrowed landscapes that are almost inaccessible.

Weight: Average weight of the skinks is about 10-18 ounces.

Skin/Coat Color: The baby skinks exhibit a dark black complexion with bright yellow stripes on the back of their necks that run down to the juncture of the tail. Adults begin losing their yellow stripes with age. The black back takes to the brownish side. During mating season, the neck starts growing a reddish color. Females continue to keep their blue tail throughout their life.

Feet: Their feet are fairly long and are almost rectangular in shape with five claws in each foot adapted to grip branches properly.

Head: The shape of their head is very much like the snake that seems to be holding a Jacobson’s organ for the purpose of sending the air while foraging.

Tongue: The tongue is divided like serpents and flicks around in order to ‘taste’ the air of the surroundings.

Eyes and Eyelids: Eyes are round and black, which also resemble the eyes of snakes, for which they are also known as ‘Snake-eyed Skink’. They have hidden eyelids, which refers to their fused eyelids for which they are grouped under ‘Cryptoblepharus’.

Nostrils: Nostrils are situated just above their mouth and below the Jacobson’s organ.

Tail: Its tail is the most conspicuous feature in the entire body. As the name suggests, these skinks, including both genders, have bright blue tails. 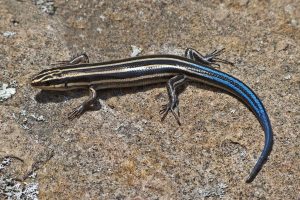 The longevity of the blue-tailed skink is 5-7 years in the wild. 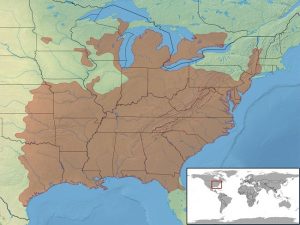 Habitat: Where do Blue-tailed Skinks live

These creatures dwell primarily in forest areas, but also went feral, roaming around the suburbs, often seen on the walls and people’s fences. They love tall thickets with deciduous trees and around the coastal areas, primary rainforests, in the settlement areas, including such areas that have been left unrehabilitated by mining.

No subtypes of this species have been reported. 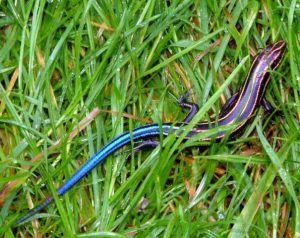 The blue-tailed skink is a diurnal lizard that would be the most active between 10 AM and 2 PM. Beyond this time range, they are seldom seen foraging or basking around. These skinks mainly bask on brick walls and stones, on the boundaries and fences, fallen tree trunks, clearings in primary rainforest, atop ornamental trees, small shrubs and even on coconut palms.

These reptiles dig burrows and build their own tunnels. This is to ensure that they always have the access to a hole for shelter and protection. These skinks are good climbers, and are mostly commonly seen foraging in areas with low vegetation on the ground, on exposed rocks, in the tree canopy, low on the trunks of trees, etc., and may be exposed to predation attempts while foraging.

The species is omnivorous and is a generalist predator of mostly all kinds of small invertebrates. They occur both in groups, or sometimes singly, however, the size of their individual home range is not known. 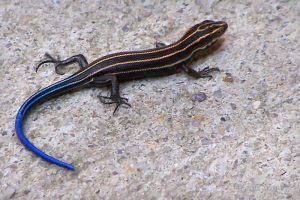 Diet: What Do Blue-tailed Skinks Eat

They mainly thrive upon all types of available small bugs and different types of worms, like earthworms, and other invertebrates.

The age of first breeding of the blue-tailed skink is approximately one year. Once they attain their age of sexual mating, breeding can occur throughout the year. They are oviparous and generally lay two eggs at a time. Their hatching period is approximately 75 days. The generation length of these skinks is about 3-4 years. 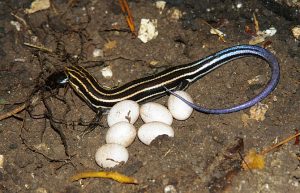 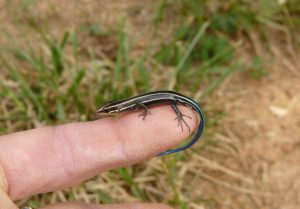 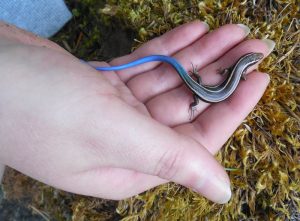 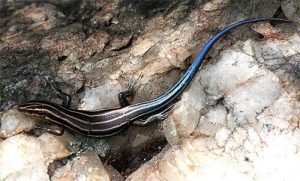 The main physical difference between the blue-tailed skink (Cryptoblepharus egeriae) with the five-lined skink (Plestiodon fasciatus) is that, unlike the five-lined skinks, the former is relatively smaller, with a black body having yellow stripes that run down to a bright blue tail.

The Australia wide : Conservation Status : EPBC has described their conservation status in the following manner: 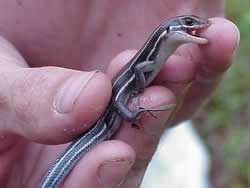 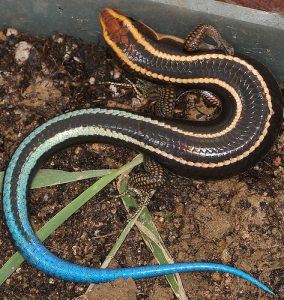