The Black-footed Ferret is an endangered species of small mammals that were considered to be extinct in 1979 for its apparent unavailability, until it was rediscovered two years later. These mustelids were then bred in captivity by the United States Fish and Wildlife Service and were reintroduced in different parts of the USA and Mexico between 1991 and 2008.

The primary cause of its ‘disappearance’ was because of the decrease in population of prairie dogs (their prey) and for an infectious bacterial disease named sylvatic plague. This ferret is also known as ‘American polecat’ and ‘prairie dog hunter’. 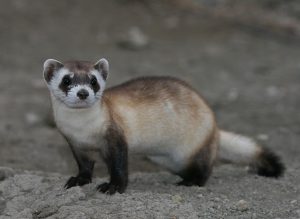 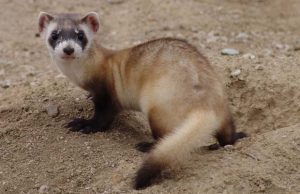 Fur/hair/coat: Body hair is tan or buff with black tip hairs along the back part, but have a lighter color on the underside.

Feet: Legs are very short. All the four legs and feet are black.

Eyes: Round dark eyes with black marks all around.

Sexual dimorphism: The males are slightly larger than the females. 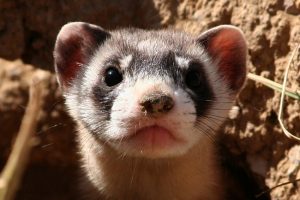 These ferrets are the dwellers of the Northern Great Plains, around the mountain basins, and the semi-arid grasslands of west central North America extending from southern Canada to northern Mexico. Populations have been reintroduced to southeast Wyoming, northeast Montana and western South Dakota.

Habitat: Where do Black-footed Ferrets live

These carnivores inhabit the short or middle prairie grasslands and are mostly common in the regions wherever its prey prairie dogs are located. 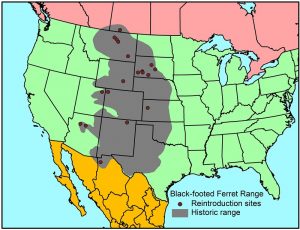 Around 1000 individuals of the species live in captivity at the breeding facilities. Another 200 of these creatures live in the wild after they were released by the government.

Black-footed ferrets are primarily nocturnal and go out for hunting during night time. However, at times, they are also seen in the daylight. The black-footed populations need viable prairie dog towns for survival.

They mainly hunt below the ground typically when the prairie dogs are sleeping. They primarily follow the ambush hunting techniques near to dawn when their prey emerges from their burrows.

Not just do they depend upon the prairies for food, they typically live in the burrows made by the prairie dogs. They spend 90% of their time underground. It is in these underground burrows that they eat, sleep, raise their babies, etc.

Generally, these creatures are territorial and lead a secluded life, except during the mating season or while bringing up the kits. The average territorial range of the male home is 132 acres that usually overlap the female home with an average range of 65 acres. The ferrets are very vocal and would frequently whimper, chatter and hiss. 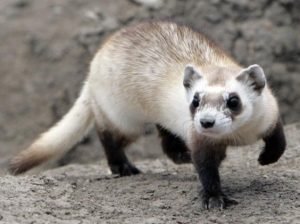 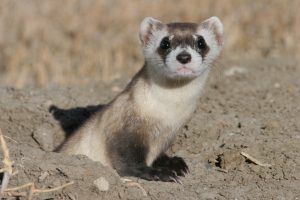 Diet: What Do Black-footed Ferrets Eat

As mentioned, with up to 90% of their diet consisting of prairie dogs, the black-footed ferrets primarily hunt these creatures. They also feast upon other creatures like rabbits, small birds, voles, and mice.

The breeding season of the black-footed ferrets begins from late January until early June with higher success rates between late March and April. A territorial male would mate with as many females it can. They mate in the burrow underground.

After a gestation period of 44 days, the babies are born underground. The litter size of the black-foot is 2 to 6 (average 3). The infants are born with fine white fur, and are completely blind and helpless and remain dependent on their mothers for about a couple of months. 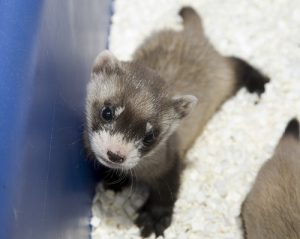 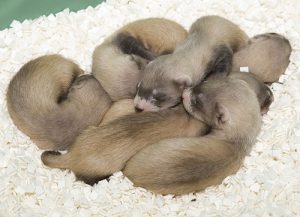 The mother takes care of its babies until they learn coming out of their burrows. The young kits are very playful and would often wrestle with each other. The babies begin developing their body marks 3 weeks after birth. Their eyes open when they are about a month old.

They continue staying with their mothers until the next fall, and are ready to breed when they attain the age of about ten months. 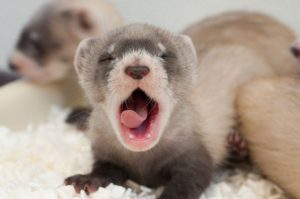 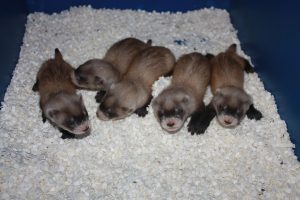 The black-footed ferret is a threatened species. The IUCN 3.1 has categorized them under the ‘EN’ (Endangered) species list. 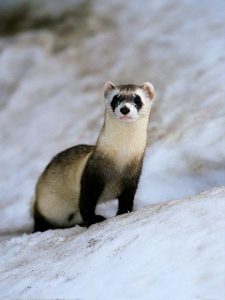