The Beluga Whale, also known as the White Whale, the melonhead, the sea canary (or simply, the beluga), is a mid-sized toothed whale species. The beluga is one of the most distinct species of whales that is distinguishable especially for its unusual color and high-pitched twitter. The mammal is one of the 76 cetacean species and is one of the two members of the Monodontidae family (other being, the Narwhal), and the only member of genus Delphinapterus. Moving around in small groups or pods mainly in the Arctic waters, every year they draw a large number of tourists to Alaska, where they are one of the most popular aquatic animals. 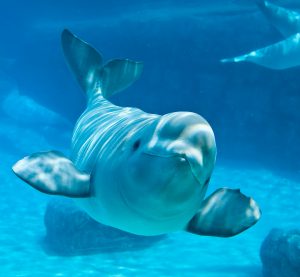 Shape: Fusiform but stocky and robustly built, with folds of blubber.

Tail: They have a wide tail which is deeply notched.

Fins: Fins are smaller in comparison to the body and rounded and bound firmly by connective tissues, with slight curvature at the tips.

Eyes: Small and black, located next to the ends of the mouth.

Ears: Situated just behind the eyes; no ear lobes or prominently visible openings.

Head and Neck: The neck vertebrae are not fused. Hence they can move their neck up and down, or side by side.

Teeth: Shaped to grasp and tear firmly, the teeth are peg-shaped counting to 8-10 on both sides of each jaw.

Melon: Changes shape when belugas emit sound. It is more flexible than other whale species.

Blowhole: Set atop the head, covered by a muscular, water-tight flap; opens only during breathing.

The beluga whales are spread all over the frigid arctic waters and also in some parts of the subarctic regions. They dwell across the belt stretching through the shore lands of the United States (Alaska), Canada, Greenland, Norway and Russia. According to genetic research, the five of the determined beluga whale stocks in the US waters are eastern Bering Sea, eastern Chukchi Sea, Beaufort Sea, Cook Inlet and Bristol Bay. 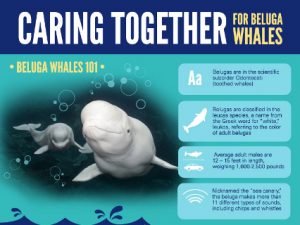 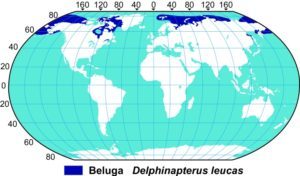 Some belugas would migrate seasonally, while others would only travel within a small localized area. Though they can withstand temperatures below 0 degrees centigrade, yet migration occurs especially during winter months when there are chances for them to get trapped in the ice of the Arctic waters. During migration, small groups or pods join each other forming a huge group consisting anything between 200 and 10, 000 individuals. Often, they also migrate with the bowhead whales.

Beluga whales are extremely social and intelligent by nature and would move around, hunt or migrate in pods. Normally, each pod consists of 2 to 25 individuals (both males and females), although mother belugas often form separate pods with their babies during calving season.

Belugas are in a habit of chasing each other out of playfulness or aggression, rubbing their bodies against each other.

It has also been noticed that these whales carry different objects like fishing nets, animal skeletons, planks etc. on their backs and heads. In captivity, the females have been seen carrying buoys and floats. Experts suggest that, this interaction with objects might be a display of surrogate behavior.

These whales are curious about humans and often swim up to boats. Although, unlike the killer whales and the dolphins, they do not display any aerial behaviors like breaching or jumping. 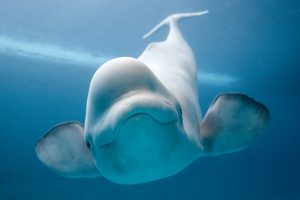 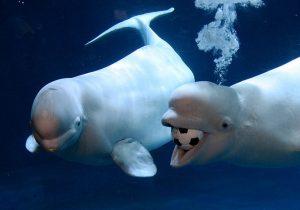 Like many other cetaceans, belugas emit a lot of sounds/noises for communication. These are mainly emitted for locating objects (e.g. while echolocating the prey in the dark or dull waters), or to navigate through the depths of the ocean. They need the help of these sounds when the power of vision is of little use. Some sounds can often be heard from under the boats, while other low-frequency sounds are inaudible to human ears. At least 11 individual sounds, including high-pitch whistles, bell-like tones, squeals, clucks, clicks, mews, chirps, and trills have been documented.

It is yet unknown as to how the beluga whales can produce sounds despite having no vocal cords. It might be the result of different movements of air between nasal sacs near to its blowhole.

Diet: What do Beluga Whales eat

Beluga whales are at the top of the food chain. Being opportunistic feeders, the diet of the belugas depends on the season and their location. Their diet mainly consists of fishes like herring, sculpin, salmon, flounder, Arctic cod, capelin, smelt, sole, Greenland halibut, etc. They also feast upon invertebrates like crabs, clams, bristle worms, squid, sea snails, shrimp, octopus and other species of the deep sea. 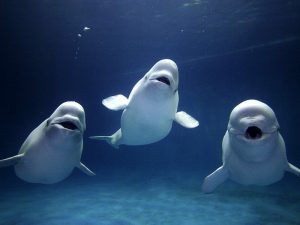 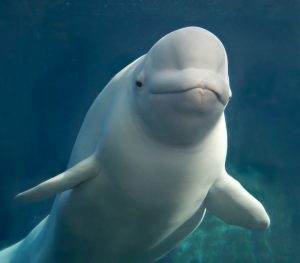 Other than human predators, the primary natural predators of the beluga whale are the polar bear and the killer whale. The calves are most vulnerable. While the belugas had been hunted down by humans for hundreds of years, their present human predators have got limited to a few of the tribes dwelling in the Arctic regions. 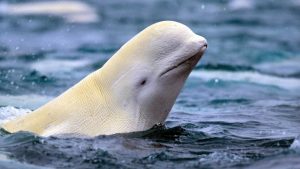 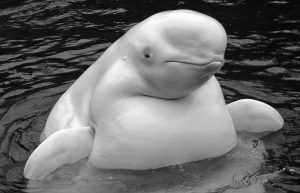 How long do Beluga Whales live

Although the life span (longevity) of these sea mammals are yet a topic for research, the average lifespan is on the order of 30 to 35 years. Research conducted in 2006 opined that, these whales can live for about 70 to 80 years.

The male beluga whales attain the age of sexual maturity (reproduction) between age 8 and 9 years, whereas the females are not sexually mature before they are between 4 and 7. However, this estimation varies between marine biologists. The average age of the females to conceive is 8.5 years.

One dominant male might mate with multiple females. The mating season of the belugas is between late winter and early spring (February through May), which is about 10 months after calving. They usually move to estuaries and bays to breed. 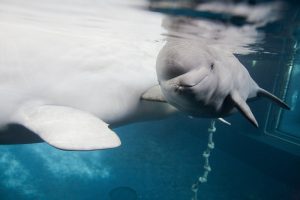 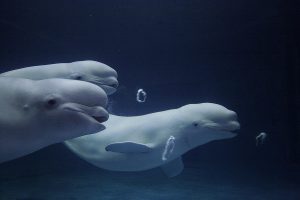 Typically, the female gives birth to one calf every three years. The estimated gestation period of the mother whale is 12 to 14.5 months, after which the baby is born with the ability to swim along with its mother. Soon after lactation is initiated, the baby mammals feed on their mother’s milk at an interval of about an hour. The calves depend on their mother’s milk for almost a year after birth, after which they gradually begin feeding small fishes and shrimps, as their teeth start showing up.

Beluga whales are not potentially dangerous or harmful to humans (like most other whales). They are typically shy and solitary by nature. However, out of curiosity, they would often approach moving objects (like vessels) to witness ‘what is going on’. Beluga whales are trainable, and like dolphins, can mimic human speech. They have been shot together interacting with many human trainers, divers or biologists.

The estimated population of the beluga whale (as has been estimated by the IUCN in 2008) is 150,000. With a number of varied subpopulations spread globally, the International Whaling Commission has recognized 29 subpopulations of this marine mammal.

Although the beluga whales are not ‘endangered’, but they have been listed under the ‘vulnerable’ category by the IUCN/The World Conservation Union, which means, the species faces a risk of extinction.

One response to “Beluga Whale”