The Toco Toucan (pronunciation: toko too-kun or, toko ‘too,kan) is a South American bird famous for its enormous, colorful beak, and flaunts the largest bill with respect to body size of all birds. Spread almost all across the continent’s rainforest area, this species is the largest member of the toucan family, and is a center of attraction in innumerable zoos across the world. They can adapt themselves to manmade habitats when rain forests are destroyed. This is a trait that has probably kept them far from being endangered. 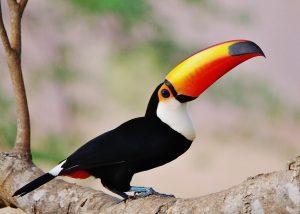 Physical Appearance: How Does a Toco Toucan Look

Feathers/Plumage: Almost the whole body is covered with black to dark bluish feathers, except for the throat, which is white.

Eyes: Each round eye is bordered with a ring of blue skin, which is further bordered by an orange skin.

The Tocos have bills with vibrant colors which help them camouflage in the dense forest. The beak is bright orange in color, measuring to about 8 inches in length. This is almost a third of the total length of the bird. Though the beak apparently looks heavy, it is actually much lighter, made of the protein ‘keratin’. Additionally, the anatomy is such that, the beak can incorporate several air pockets that allow for a very low mass.

Although it is thought that, the large, colorful bill plays a part while choosing a mate, there is no conclusive evidence supporting this theory. Recently, studies have also revealed that, these bills regulate the temperature of the toco’s body adjusting blood flow to the beak. More the blood flows, more heat is released, which is how these birds can also keep their body warm by tucking their beak on its back feathers. 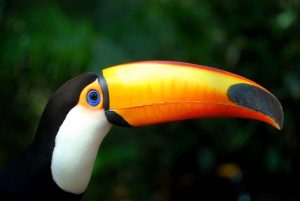 The size and shape of the bills have also made it easier for them to catch their prey and also to peel and pluck fruits. Thus, they are able to reach out to such foods that can be out of reach to other smaller species. Their bill accounts for almost one-twentieth of their total body mass.

In the wild, the longevity of the toco toucan is typically 20 years, which might extend up to a maximum of 26. However, in captivity, their lifespan decreases to about 18 years. 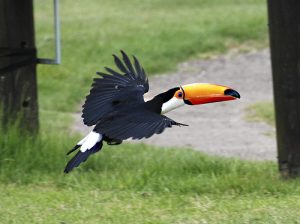 Toco toucan birds are found in many countries throughout South America that are located mainly between the central and the eastern parts of the continent including Brazil, Venezuela, Guyana, Suriname, Bolivia, and Argentina. 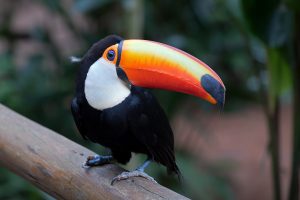 Habitat: Where Do Toco Toucans Live

The Tocos mostly dwell high above on top of the trees in the biome of the rainforests. A few individuals of the species would live together in one single hollow. 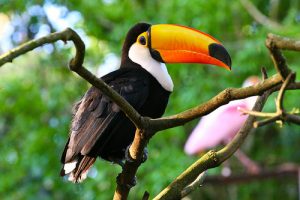 The birds have a loud, husky call and communicate very loudly. So much so, that their chatter and frog-like croaking calls can be heard from a distance of almost half a mile. Their noisy vocalizations seem to subdue the very purpose of camouflage. 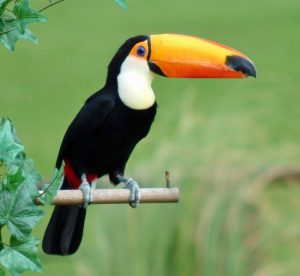 The toco toucans are extremely gregarious and social, spending most of the time in pairs or flocks consisting of around six members. They take turns cleaning each other’s body using their bills. The toucans are quite mobile because of the continuous change of available fruits in their geographical habitat.

These birds express by various means of repeated sound production, which are deep and coarse, but are quite consistent. They would also converse amongst themselves using rattling sound, which is also a very common practice. The birds would clack their bills as a kind of auditory communication with each other. They can also perceive their environment using chemical, tactile, and visual stimuli.

While flying, these birds are seen alternating between gliding and rapid flaps of their rounded, relatively short wings. They are not very skilled fliers and would often hop or walk across the tree branches to reach the places where their foods are. The birds utilize their large bills to peck the fruits and consume them. 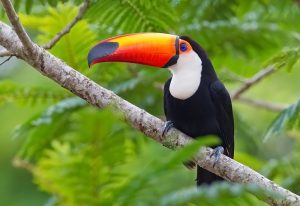 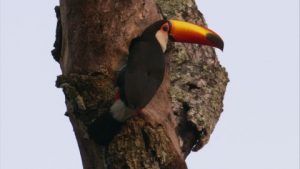 These birds are monogamous and breed only once a year, with the breeding season occurring in the spring. During mating, either the female or the male use its bill to collect fruit to initiate a fruit toss with its potential mate. After a successful courtship ritual, the male bird engages in sexual intercourse with the female. 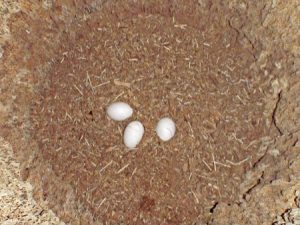 These Toucans build their nests seasonally. However, the timing of their nesting differs from region to region. The nests, which they usually acquire from other species of birds like woodpeckers, are also hollowed and modified by the toco parents to make them spacious before breeding.

Generally, they lay a clutch of two to five eggs every year. The eggs are incubated for 16-20 days by both the father and the mother toucans. After the chicks are hatched, both the parents continue their care for the juveniles. The hatchlings are bare-skinned with their eyes closed and helpless, until they are about 6 to 8 weeks old, after which their first fledging begins. The young ones are born with a dull color, and with a much smaller beak that grows along with their physical development. The range age of sexual or reproductive maturity in both the male and the female is 3 to 4 years. 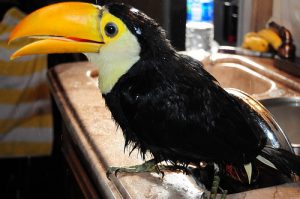 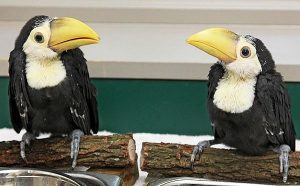 Diet: What Does a Toco Toucan Eat

These birds are primarily omnivorous. However, they mainly thrive on fruits. They sometimes do prey upon insects, lizards, small birds and, occasionally, eggs. 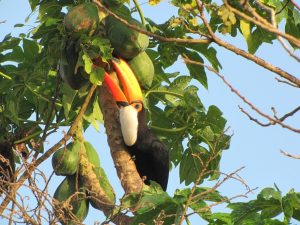 Predators: What Eats a Toco Toucan

Because of their poor flying capacity, they often fall a trap to predators that are quite unusual for other bird species. They are predated by mostly jaguars, snakes, coatis, and eagles. 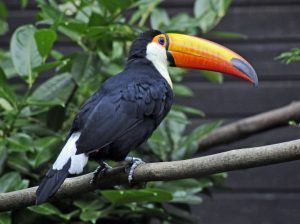 The toco toucan is not a threatened species. The IUCN 3.1 has categorized them under the ‘LC’ (Least Concern) species list. It is also enlisted in BirdLife International’s ‘Least Concern’ list. 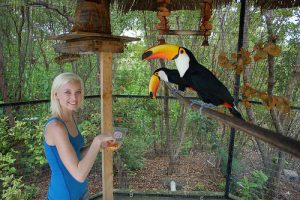