The Silver Haired Bats are a vesper bat species belonging to the Vespertilionidae family. They are the only member in the Lasionycteris genus. These bats are commonly found in United States and Canada. They are also known as Silverwings.

These bats have some unique features in their appearance that differentiate them from other bats.

Color: They have black (rarely dark brown) fur tipped with silver. This coloration gives them a frosted appearance.

Weight: The average weight of these medium sized mammals ranges between 8 gm and 12 gm.

Size: They grow around 100 mm in length with the tail being approximately 40 mm long. Their wingspread is somewhere between 270mm and 310 mm.

Head: They have a pair of small eyes and small rounded ears. The silver tipped fur does not extend to their face, neck and ears.

Wings: They have a pair of wings made of thick layers of skin. These wings enclose their front and hind legs and the tail. 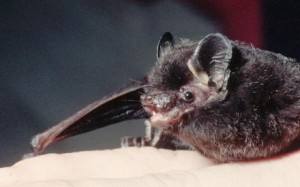 This species is most commonly found in various regions of United States. Their distribution area also includes Canada, Bermuda and Mexico.

This tree-roosting species of bats prefer to live in dense forest areas. They are quite solitary in nature and like to live alone.

These bats have the similar behavior patterns as many other bat species.

They belong to the only order of mammals capable of true flight. They have many adaptations for flying or gliding. The bone structure of their forearms is relatively similar to other mammals. However, the forefingers are elongated to a great extent to support their wings. These fingers have very thin bones lacking claws. The thumbs on the forearms consist of large hooked claws to help them climb trees and walls. The back legs have large prominent claws to help them hang in the upside down position.

Despite being active during night, these mammals have poor eyesight being able to see properly only in bright light. So, they use the process of echolocation (biological sonar) to understand their surroundings and catch prey in dark. Like all other bat species, these bats produce rapid sounds that bounce off their surroundings like walls, trees or insects and come back to their ears as an echo. These echoes help them to understand the size and shape of an object, its distance and its situation (whether it is still or moving). They can also distinguish between small and large insects.

Their reproductive season stars around August during autumn; however, fertilization is deferred until following spring. The female Silver Haired Bats give birth to two young bats sometime between late June and early July.

The young bats are born hairless with their eyes closed. They weigh around 2 gm each at birth. Young Silver Haired Bats become capable of flying 2 to three weeks after their birth becoming reproductively mature during the following summer.

The average lifespan of this species is 12 years.

These bats are known to cover very short distances in a single glide at a low speed. They can attain a speed of 18 km/hour when gliding on a straight track. 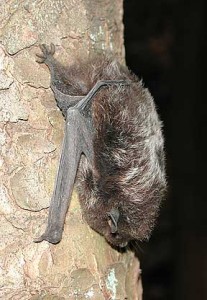 Silver Haired Bats were among the first bat species documented to have seasonal migratory patterns. They migrate to regions with relatively temperate climates during winter to hibernate. Their migration takes place sometime between late August and early September.

They are known to hibernate during winter with low body temperature and metabolic rate. Hibernation takes place in tree cavities and abandoned holes of woodpeckers and occasionally inside caves. The hibernation period comes to an end around fall.

It is not recommended to keep this species as pets because it is very difficult to take care of them and they may even die in captivity. Moreover, they are suspected to carry viruses that cause the contagious disease Rabies.

One needs to obtain proper license and permits in order to keep a Silver Haired Bat in captivity for building a zoo or for research purposes. Otherwise it is illegal to keep them as pets according to federal and state laws. One should also consult a specialist to learn how to provide for these animals in captivity.

These bats are very interesting with their unique appearance and behaviors.

Here are some images of these amazing mammals. 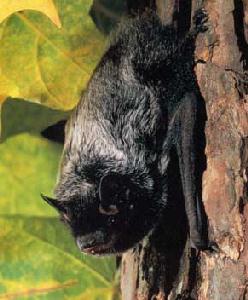 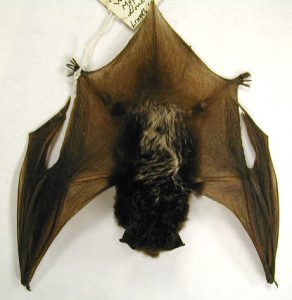 Silver Haired Bats have created great curiosity and interest among humans with their unusual appearance and behaviors for a very long time. However, humans should never forget that they are essentially a wild species and never do well in captivity. There are some volunteer institutions workings hard to provide information about the care, importance and conservation of this species.