The Red-headed Woodpecker is a gorgeous woodpecker bird with a bright red head from which it got its name. This North American species, with its boldly-patterned plumage, is popular among the bird-watchers and is widely spread almost all across the country, and is known in different names like ‘flag bird’ and ‘patriotic bird’. Once a very common bird in the country’s eastern part, this species has been showing long-term declines in a moderately rapid rate, which is primarily because of their degradation and loss of habitat in recent decades. 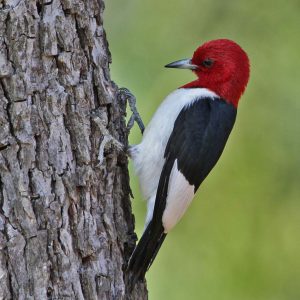 Feathers/Fur/Coat: These birds have their heads, necks and upper breasts red, with a white lower chest and stomach. They have large square areas of white on the rear part of their wings as also on the upper rump. Though, the juvenile red-headed has a buffy-brown to grey neck and head that gradually turns red after the first molt. They have no crest.

Wings: They have bluish black to dark gray wings with a white patch on the back.

Tail: The tail of these birds is moderately long and is bluish black to deep gray in color.

Bills/Beaks: The bills are long, and quite strong and sharp.

Eyes: Their eyes are bead-like and are dark black.

Feet: Both their feet are gray to olive gray in color.

Sexual Dimorphism: Males and females look very similar to each other. 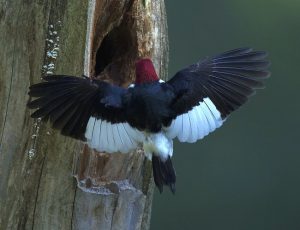 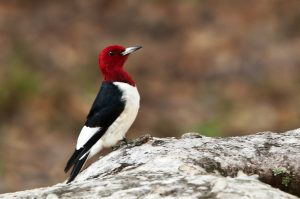 Habitat: Where do Red-headed Woodpeckers live 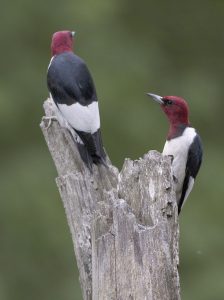 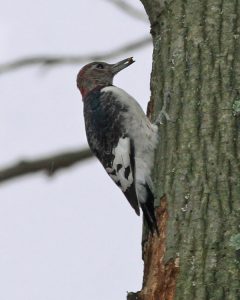 Three subspecies of these birds have been recognized:

Red-headed woodpeckers are generally solitary birds and only spend time with their mates during mating season, and when raising their babies. The RHW is omnivorous. They live on both plants and animals. But two third of their food comprises of the former. They spend most of their time searching for foods, and they would primarily forage on trees and from plant to plant and gather their food for consumption, or for storing them.

These are one of the most accomplished flycatchers belonging to the ‘Picidae’ family. They start gathering their foods from autumn and store them for the winter season, when food is relatively scarce. They store their food in crevices, holes. Like other woodpeckers, they catch insects by the process of tapping on woods or from the ground or on flight, mid-air. They are opportunistic hunters and use many techniques to forage. They would suddenly dart out from a hole or a perch to catch any flying insects falling in its path. 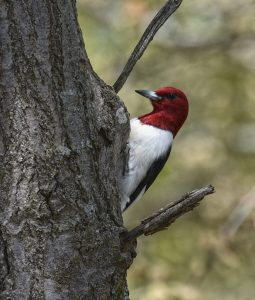 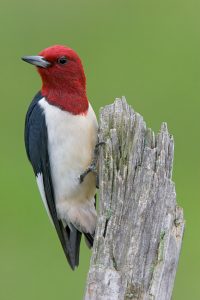 These woodpeckers make their homes inside dead trees, branches, stumps, in telephone poles, fences, utility poles, or even on dead tree parts, 8 to 80 feet above the ground. They use their bills to make cavities in the tree trunks or woods. They would either dig their holes or else would live in an existing hole or cavity.

The RHW has gained the reputation of a bad-tempered bird for its display of aggression. They are highly territorial, and wouldn’t hesitate getting aggressive with even larger species of birds, when it comes to defending its nesting or food storage areas. While they defend their breeding territories in spring and summer, they would defend their feeding territories in fall and winter.

These woodpeckers use a wide array of calls and drumming. Their raspy calls have a striking difference with that of the Pileated and the Red-bellied Woodpeckers, with the former’s call being even shriller and scratchier. For example, they would emit a ‘tchur-tchur’ call or drum when they are in their territory. You can listen to the audio files of songs and calls given by the RHW below:

Diet: What Do Red-headed Woodpeckers Eat

The red-headed woodpecker generally eats a higher percentage of carnivorous foods during springtime, while the mainly consume plant mater during winter.

Among the animal foods, they would feast upon everything from birds, mammals, insects, terrestrial non-insect, arthropods, worms, and even eggs of other birds. Their herbivorous diet chart includes items like wood, bark, stems, seeds, grains, fruit, berries, acorns, etc. But their most favorite foods are nuts, which they often consume (like the beechnuts).

The red-headed woodpeckers are monogamous birds. They would stay loyally with each other often for several years. The breeding season of these peckers is between April and August. Amongst the resident birds, the winter territory of the males often becomes its breeding territory. During nesting, usually the males either excavate new cavities, or else, the cavities in which the birds resided during winter time are often converted into a nest.

Prior to sexual mating, the female indicates its acceptance of the breeding site by tapping on the tree. These cavities are located in bare dead trees or dead limbs, built around 65 feet or higher from the ground level. The breeding pairs would often use the same cavity over a number of years. Both the father and the mother excavate their nesting cavity, and perform the duty of incubating their eggs. 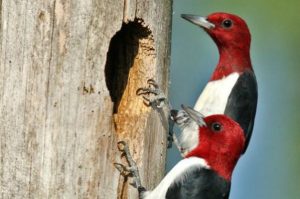 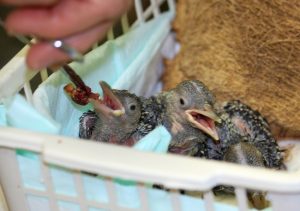 The clutch size of the female red-headed woodpecker is 4 to 7. They usually lay their eggs by May or June, which are then incubated by both the male and the female for 12 to 14 days. Both the adult care for their eggs and the young ones, that mostly takes about 24 to 27 days to fledge from the time they have hatched out.

After birth, both the parents would feed their fledglings and protect them from enemies. Though, there have been reports that these birds also practice cooperative breeding, which means, more than two birds can also be involved in defending a nest and raising the young. The breeding pairs that hail from the southern regions have been seen raising two broods in a year. The red-headed woodpeckers attain the age of sexual maturity when they are a year old.

Habitat loss is one of the prime factors for the decline in population of the red-headed woodpeckers. Open woodlots, their most important place of dwelling, are gradually declining by forest succession, which in turn has reduced their number of their suitable habitat. These birds are also facing competition with other birds like the aggressive starlings that are taking over their cavities and places of nesting. 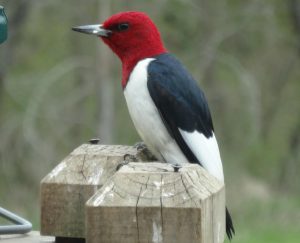 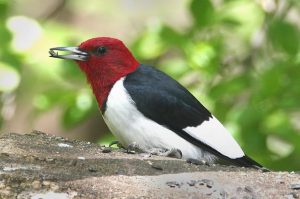 The known predators of the red-headed woodpecker are the Cooper’s hawks, peregrine falcons, eastern screech-owls, red foxes, black rat snakes, raccoons, flying squirrels (Glaucomys), etc. They can also have other predators, depending upon their habitats. 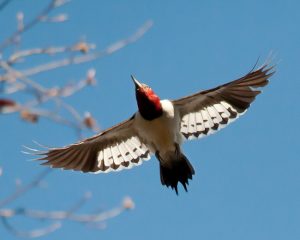 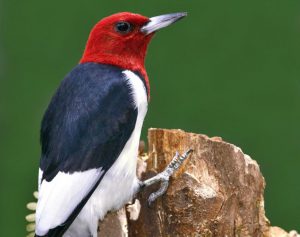 The red-headed woodpeckers have been listed by the IUCN 3.1 under category ‘NT’ or “Near Threatened”.