The Red-Eared Slider, also called the red-eared terrapin, is an American breed of turtles widely spread across the USA, and is quickly becoming an invasive species in many parts of the world. It is also the most popular breed of pet turtle in the US and is widely kept as pet around the world. Considering the total number of turtles and tortoises traded globally, this breed is the most commonly-traded testudines of its kind. 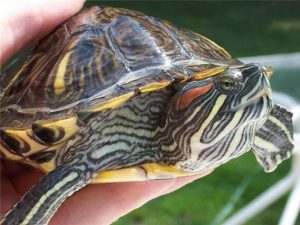 Size: The adult male red-eared turtles can grow up to 7-9 inches by size. The females can attain a length of 10-12 inches. However, some individuals seldom grow bigger. The newly-born baby red-eared sliders (hatchlings) are approximately 1 inch in diameter.Description

Weight: A full-grown red-eared turtle can attain a weight of up to 3 kilos.

Skin/Color: The red-eared’s skin is mainly green marked with yellow stripes. They have a red patch behind each of the eyes. However, some might have a single red patch atop their head.

Shell: The carapace of a baby red-eared slider is marked with fine patterns of yellow-green to dark green markings upon a greenish base. During the process of growing up to an adult, the color of the turtle starts to change to olive or yellow. The fine light patterns turn darker, while some part of the shell get hues of yellow, white or even red. With aging, all hues, gradually, start to fade, until the coloration attains a solid hue of green-brown or dark olive. In some cases, the males of the breed turns completely black or dark gray.

Feet: The red-eared slider is characterized by webbed feet fitted with strong claws.

The red-eared sliders are native to the southerly regions of the USA, in warm climates in the southeastern corner of the United States, and the north of Mexico. Basically they evolved from the area around the river Mississippi and the Gulf of Mexico. They are also found in large numbers in and around river Rio Grande. The native areas of these turtles is the southeast of Colorado and Virginia, however, as mentioned, they have now spread all across the world as an introduced species. 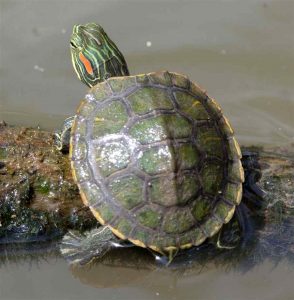 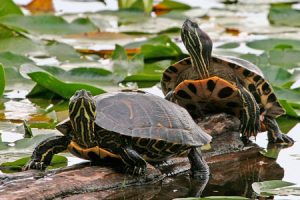 The red-eared sliders love swamps. They live in marshy areas with warm and calm water bodies like ponds, lakes, slow-flowing rivers, creeks etc., where they can easily crawl out of water to find a place to climb onto for warming themselves up regularly, or where the females can leave the water for laying her eggs.

The red-eared slider is almost completely aquatic. Although harmless and peaceful, and are gregarious by nature, these turtles are extremely alert. They are territorial by nature. These creatures are cold-blooded and hence need to frequently come up in the land in groups for a warm-up. When they are out of water, they would remain extremely cautious and would instantly get back into the water if they feel threatened or even see a human. The red-eared sliders are excellent swimmers.

If provoked, these turtles do bite, both in the wild or as pets, and that can be quite painful. They wouldn’t bite without a cause. But the bite can prove harmful especially to young children having little fingers. 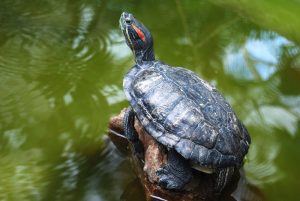 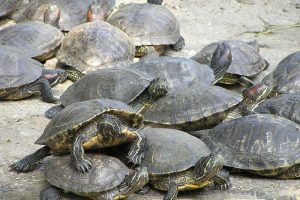 Although, there have been many reports from red-eared slider owners that they often get hissing sounds, but, the fact is, the sounds do not come from their mouth. Turtles do not make noises. Such sounds might often be emitted from the turtles while expelling air from their lungs so that they are able to retreat into their shells.

Other than having the general adaptations of most other types of turtles, like having hard shells or the ability to retract themselves inside their shells, the body and shell color of the red-eared sliders is brown, black and/or dull green, the color common to the waters and areas where these turtles dwell. This is a behavioral mechanism that includes ‘aposematic coloration’, which means that, these creatures have a distinct pattern or colors that predators learn to avoid for one reason or the other.

The vulnerability to perils and predators depends upon how big do red eared sliders get. Although the young or baby sliders have many predators like fox, wading birds, skunk, raccoons, storks etc., the adult turtles, considering their size, bite, shell-thickness, are potentially free from predators, unless crocodiles and alligators are not around. 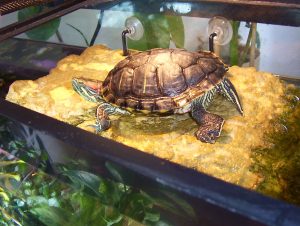 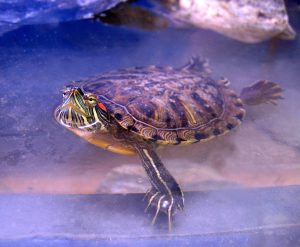 In the process of growing, these turtles would frequently shed the outer layer of shell scale.

Reptiles do not hibernate, nor does the read-eared slider. Rather, during winter months, they brumate, which might apparently be similar to ‘hibernation’. ‘Brumation’ is the phase during which these creatures stay inactive for 1 to 8 months at a stretch (depending upon climatic factors, its health and size) under water without much activity and often with less or no food (“state of sopor”). However, they do need to drink water during this stage.

In captivity, the average lifespan of the red-eared slider is 20 to 40 years. However, reportedly, they have lived for upto 80 years in the wild. 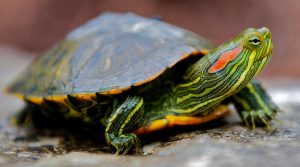 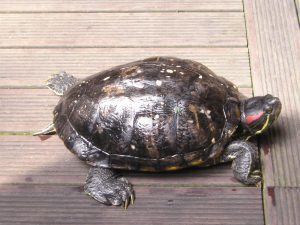 The courtship or mating rituals of the male red-eared slider is performed underwater, which can last for up to 45 minutes. Though, the mating process lasts only up to 10 minutes. During the mating dance, the male vibrates and flaps the back of his claws on and around the face of the female. If receptive, the female would float down at the bottom to signify that, she is ready for mating. However, at times, if the female is not receptive, she might become aggressive to her mate.

When the female is pregnant with eggs, she would often change the course of her everyday diet, or refrain from consuming the usual amount of her everyday food. The female takes time to bask her eggs every day, and would lay anything between 2 and 30 eggs at one go. These eggs are laid inside a burrow, which she would dig out with her hind feet. The gestation period of the female can be days or weeks, while the incubation time is 59 to 112 days. The hatchlings break out of the eggs, using their temporary egg tooth, that would fall off within an hour of their coming out. 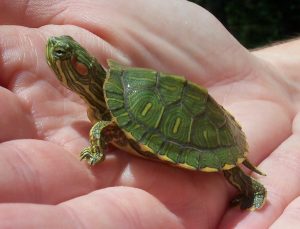 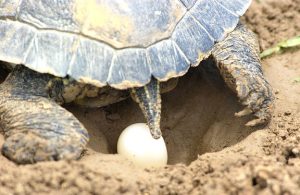 Since the red-eared slider is one of the most popular testudines among the aquarium enthusiasts in the United States, they are easily available for sale. They are now gaining rapid popularity around the world as an aquarium pet or for outdoor ponds. At the same time, it is also important to have a detailed understanding and information about adapting these wonderful animals. Know how to care for a red eared slider turtle:

Tank setup:  A glass enclosure that has enough water to allow the turtles to swim around (a minimum of 10 gallons for every 1″ of shell length). Because these turtles are cold-blooded, they need to come out of water from time to time. Hence, there should also be an area within, where the turtle can climb up easily from the water and bask. The tank must be deep, since the turtles love swimming in deep waters.

Water type and temperature: Clean tap water is necessary. The recommended pH level of the water is 7.0-7.5. But the temperature of the water should always be towards the warmer side, around 77 – 80 degrees F (25.5 – 26.5 C). However, the temperature should be a couple of degrees more for the sick or the hatchlings. Because turtles create lots of wastes, less amount of water in the tank can make the tank water unclean, which might ultimately prove to be unhealthy for the turtle in the long run.

Water filters: Adding a strong filter is essential to keep the environment healthy and free from factors causing diseases. All kinds of aquarium filters like the under-gravel filter, the internal or the external canister filters are recommended for the purpose. 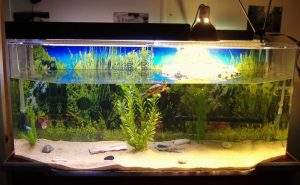 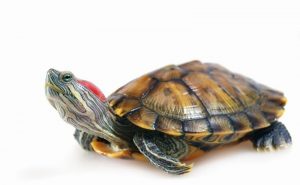 Lighting: As mentioned, these reptiles need to warm up in the sun at intervals. UVB lamps are a substitute to this, as they provide enough light and heat to these cold-blooded creatures. A 5% or more UVB light is recommended for the purpose, and has to be placed in such a way that it keeps the basking area around 10 degrees more than the temperature of the water.

Like in the wild, the red-eared sliders have no potential enemies in the tank. However, two males brought up together might at times get aggressive at one another.

What do red-eared sliders eat

Red-eared sliders are omnivorous in the wild. However, their food habit and taste change with age. They tend to become more herbivorous, as they grow older. Both plant-based and animal-based items are recommended for the red-eared sliders. High quality commercial pellets are a good option for this, as they make a good base for their diets. But other items can be also be supplemented along with. 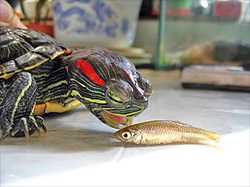 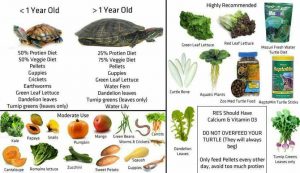 If kept unclean, or neglected, these turtles can pick up common to critical diseases very quickly, including diseases caused by the salmonella bacteria, which might be a matter of concern especially if there are children in the house. Discussed below are several other kinds of diseases and syndromes, which these turtles might develop:

Once any of the above health conditions or illnesses is noticed, your turtle should immediately be taken to a vet clinic to begin immediate medication and treatment.

The two sexes vary greatly. To understand whether a red-eared slider is male or female, look out for the following identification features:

By feet/claws: While the male red-eared slider has got long claws (nails) on their front feet, the claws of the female are comparatively smaller than their male counterpart.

By coloration: The red eye-patches in male are brighter and bigger. The colors and patches of males might vary and change from time to time, during their whole life period, while the females remain the same by appearance throughout their lifetime.

By sex organ: The big, black, sack-like penis of the male turtle is clearly visible, as it periodically everts and retracts the same.

By size: The male is comparatively smaller in size than the female.

The red-eared slider has been listed by the IUCN 3.1 under category ‘NT’ or “Near Threatened”.