Hawksbill Sea Turtle Turtles are smaller versions of the sea turtles having a distinct diet, habitat, distribution and reproductive patterns. Interestingly they inhabit many places in their lifetime. To know more about such interesting facts and details about this species, read on.

Due to the variations in water temperature, they tend to change their color. It has a striking carapace or shell whose color is mostly blotchy brown having streaks and spots. Area below the shell is white or light yellow. Newborns are dark in color. Males are of brighter shade than the female turtles.

Heart shaped carapace size of juvenile hawksbills measures around 1 inch or more while in older turtles they are around 3 ft. 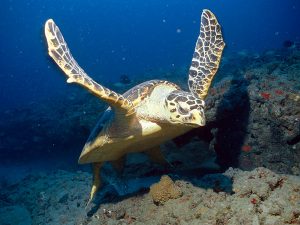 At birth the turtles weigh even less than ½ ounce and on maturity they may weigh somewhere between 70 and 80 kg.

They have certain features that set them apart from the other sea turtles. Clawed flippers and heads resembling a bird’s beak are typical to their appearance. They also have two sets of prefrontal scales and thick posterior scutes.

This species prefers to live in tropical waters so they are found throughout various locations in the world including the Pacific, Atlantic and Indian Oceans. They are intense in Caribbean Sea with some traces of occurrence in Texas and southern Florida. Basically they are distributed around the tropic of Cancer and Capricorn.

Puerto Rico has a fair distribution of this turtle in the U.S apart from Central Pacific which has a wide distribution, though the number is low. African east coast is a great place to spot these turtles as they are found there in plenty,  especially in the adjacent small islands along the Indian Ocean that are  known as Turtle Islands.

South Cuban beaches, Caribbean Islands, Yucatan Peninsula, northeastern Brazil along with Pacific shores of Panama and Mexico are populous during the breeding season. About 60 nations are considered to be the nesting grounds of these turtles but that may even exceed. 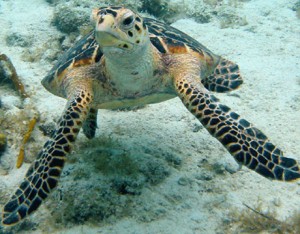 These sea turtles inhabit various locations in their lifetime as they are migratory in nature. Coral reefs are the primary habitats of this creature.

Offshore waters are simply ideal for them to live. Rocky terrains, creeks and ledges that surround the reefs are the places that they prefer to rest all through the day. They also inhabit lagoons, mangroves, swamps and other open areas. They love living on sandy pristine beaches near the coral reefs.

Their offspring live in pelagic zones until they are big enough to inhabit areas where the adults live.

These turtles largely migrate to temperate waters during summer months. In various attempts scientists have tried to track the migration pattern of the turtle.

It is evident that they can travel around 20 km in a day for two months at a stretch. They even cross international territories in the process.

Studies in this regard are not extensive yet some of the research has shown that a part of the population to be migrating for short distances as well.

They migrate to new feeding base once they attain sexual maturity. Gulf Stream currents in the Atlantic have sufficient food for the turtles where they occasionally migrate.

They have an interesting behavior pattern that can be observed. 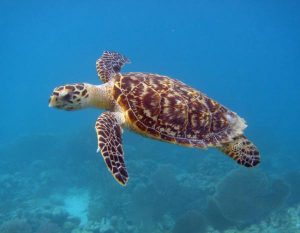 Primarily, their diet comprises sponges, algae and other invertebrates. Studies in the Caribbean have proven their dependence on sponges and it is evident that 70 to 80% of their diet is sponge based.

E. imbricate is largely preyed upon by various organisms in their entire life time. Its eggs are eaten by skunks, oppossums, raccoons, mongooses and dogs, while the young ones become easy prey of the sea birds, crabs, mammals and carnivorous fishes. In fact this stage is highly critical as they are not big enough to stop the predators from swallowing them. After growing up, they can protect themselves with their hard shells but still remain at the mercy of the sharks, crocodiles, octopuses and humans.

These are very humble creatures having few adaptive features.

Sexual maturity of these turtles may vary largely. Usually it is estimated to happen between 20 to 40 years of age.

They mate in remote islands and lagoons twice a year in shallow waters near the shore line. Females dig holes in the sand where they lay their eggs and leave them covered till the time they hatch after 55 to 60 days. But the rate of development of the embryo may depend on the temperature of the sand. They lay around 140 eggs at a time. 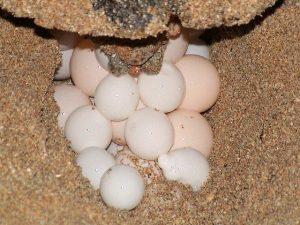 After the baby turtles are born they come out in the open during the night and are drawn to the sea by the moon’s reflection, which is perilous to their survival.

Young ones unlike its older counterparts are not good divers hence they are happy living on floating sea vegetation like sargassum. Rocky outcrops rich in sponges are also inhabited by them as they can obtain their food in plenty. The juveniles can also be found resting near stone jetties in Texas. There is however no such record of the growth rate of these turtles.

They spend their entire life by living a life in seclusion except the mating season.

Their minimum life on earth is 30 years which may prolong for more than 50 years as well.

This species was listed in the endangered species list of IUCN Red List in 1982. This status was changed to critically endangered species in the year 1996 owing to the worldwide threat met by the creatures. They have also been identified as engendered by the National Marine Fisheries Service United States Fish and Wildlife Service. Any form of trading or exploitation of these creatures is strictly prohibited.

Some of the interesting facts about these turtles are:

Here are some of the pictures of the Hawksbill Sea Turtle. 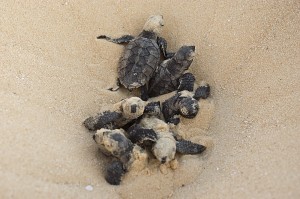 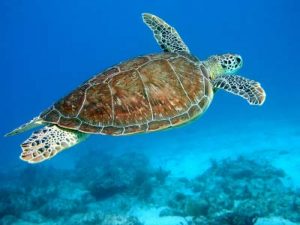