The Fowler’s Toad is a species of small toads found in parts of the United States and Canada. First described in 1882, this amphibian is presently found in almost all human-resided localities. They are a close cousin to the well-known American toad, though the former is much smaller in size and have several other differences.

Body/Skin: They are usually grey, olive green, brown or rust red in color with dark wart-like spots all over the dorsal (upper) side of the body. The ventral (lower) side is whitish. 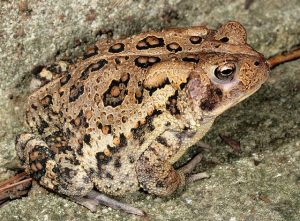 Eyes: Round eyes protruding out at the top of their heads.

Sexual Dimorphism: The males are smaller and lighter by weight than the females. Also, the males have a dark throat.

Fowler’s toads have a lifespan of approximately 5 years.

They are spread widely from the East Coast to the Gulf Coast – except the coasts of South Carolina, Georgia, and almost all of Florida. They are also spread in Texas, Missouri, and Illinois, as well as, in several parts of adjacent Canada. Presently, no regional subspecies of this toad has been classified.

Habitat: Where do Fowler’s Toad Live

The Fowler’s toads are mostly found in the prairies, woodlands, beaches, and meadows. 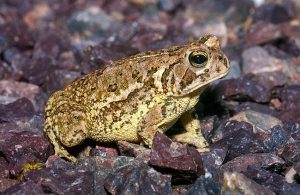 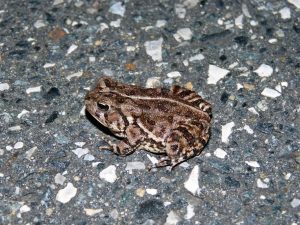 The Fowler’s toad is mostly a nocturnal creature; however, they can also be seen during the day with a frequency higher than the American toad. They are often seen in localities and urban or rural areas inhabited by man and are not really bothered seeing humans around them. Even in gardens, they would sit in the grass, indifferent, even when they feel a human presence around them.

The amphibians are not active during very hot or very cold days. When the scorching summer or the chilling winter arrives, they will spend time inside their burrows hibernating like most other toad species. If touched or handled, the creature will usually urinate in hand in an attempt to escape.

Fowler’s toads are less vocal compared to many other toad species, including the American toad. The frogs would usually emit a nasal and loud “waaaah” that might last anything between one and four seconds. The male frogs would also give out a chirping call (called the ‘release call’), when mistakenly held or handled by some other male. 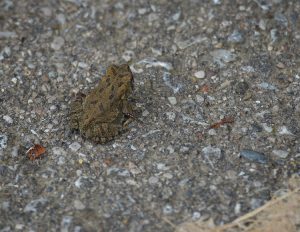 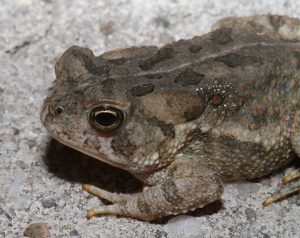 Diet: What Do Fowler’s Toad Eat

Primarily an insectivorous, the adult individuals consume different kinds of insects and small invertebrates. However, unlike the American toads, they avoid earthworms. The tadpoles live on bacterial mats and algae from underwater surfaces like rocks and water plants.

The creatures are known to breed in the warmer seasons, usually between April to July, but more frequently between May and June. Their choicest sites for mating include shallow open waters like woodland ponds, farm ponds, lake edges, and marshes.

When the time for mating comes, the male toads migrate to their favorite sites where they will begin calling out for their mates. The time between each call lasts up to 30 seconds.

Interestingly, the call frequently attracts both male and female Fowler’s toads. Such an act eventually causes mistaken identities in the process of breeding especially when a male tries to mate with its same sex. Finally, as the second male lets out a chirping release call, the first male realizes the mistake instantly.

When the male ultimately finds a female, it will get hold of the female from behind, ride it, and finally, both the toads get engaged in the act of copulation. 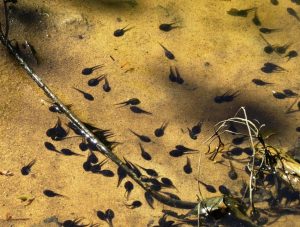 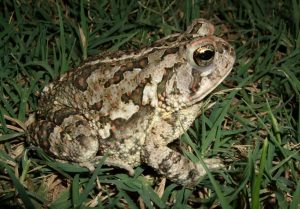 From a successful mating, a female can produce up to 7,000-10,000 eggs that fertilize externally. It takes around 2-7 days for the eggs to hatch, giving birth to tiny tadpoles.

These young creatures go through the process of metamorphosis, changing into baby toads within 4-6 weeks. The tadpoles are oval-shaped with upper and lower fins on both sides and a long tail, all of which eventually disappear, as they keep growing. When born, they are 1 to 1.4 cm (0.39 to 0.55 in) in length. They use their tooth-like structures inside their mouth to eat.

Surprisingly, these baby toads might grow to their sexual maturity within one growing season; however, there are also slow-growing individuals in the pack of babies that might take up to three years to attain puberty.

These amphibians are abundantly found throughout its habitat, and the IUCN 3.1 Red List has enlisted them under ‘LC’ (Least Concern) category. 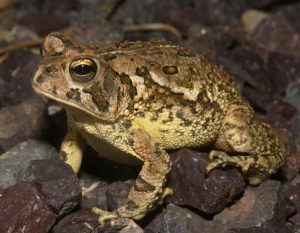 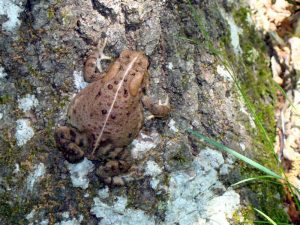