Cuban Tree Frog is the largest frog species found in North America. These amphibians are considered to be an invasive species as they can adapt to different kinds of environments and eat almost anything they can fit in their mouth. Arrival of these tree dwelling frogs in a new habitation is considered to be harmful for other local species. These frogs are easily available as pets.

Here is a general description of these amphibians:

Size: They can grow anywhere between 3 inches and 5.5 (76 and 140 mm) inches in size. This tree frog species is sexually dimorphic with the females being larger than the males.

Color: Their color ranges from olive-brown and bronze to grayish-white and grey. Usually dark splotches can be seen on their back along with some splotchy banding on their legs. The hidden surfaces of their legs are bright orange.

Body: They have a stocky appearance with a rounded body. Tadpoles of this species have wide caudal fins.

Skin: Their rough skin resembles that of toads. 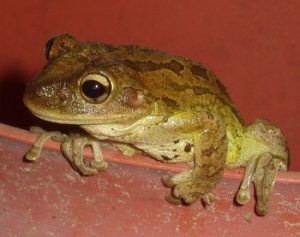 Head: Their eyes have an orange tint. The skin of their head is attached directly to their scull which prevents water loss. The tadpoles have six rows of labial teeth with two rows being situated on the upper jaw and four rows on the lower jaw.

These tree frogs are native to Cuba, the Cayman Islands and the Bahamas. They have been introduced to some other regions including the U.S. Virgin Islands, Puerto Rico, the British Virgin Islands, Hawaii and many Lesser Antilles islands. This species can also be found in southern Florida and South Carolina. There is considerable amount of debate regarding whether these frogs are native to the Key West Region in Florida.

These amphibians usually inhabit large and medium trees as well as large plants in areas with high humidity. They only inhabit areas where the minimum temperature is no lower than 10 °C preferring daytime temperatures between 23 °C and 29 °C. Their ability to survive in brackish water (water that is more saline than fresh water and less saline than salt water) has helped them to spread their population in many islands.

This large frog species eat almost anything they can conquer and swallow. Their diet consists of insects like crickets, spiders and cockroaches as well as smaller frogs, lizards, mice, small snakes and hatchling birds.

This species of tree frog has an interesting behavior pattern:

Their adaptations help them to avoid predation most of the times; however, animals like skunk, raccoons and large snakes prey on these amphibians.

The adaptations of these tree frogs make them a very powerful organism in their natural environment: 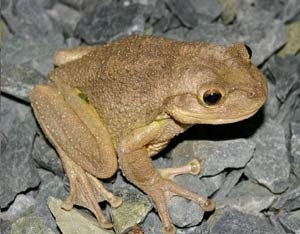 Reproduction of these frogs commonly occurs during the wet seasons between May and October; however, they are known to reproduce all year round. They become reproductively mature between 5 and 7 years. The male Cuban Tree Frogs develop black nuptial-pads on their thumbs during the reproductive season. The females lay eggs in any standing water body including small buckets and chlorinated swimming pools. Each clutch contains an average of 3900 eggs.

The eggs take less than 30 hours to hatch into tadpoles which vary greatly in color and patterns. They usually feed on algae, occasionally turning to cannibalism and eating other tadpoles and recently metamorphosed juveniles. Tadpoles complete their metamorphosis within 30 days of hatching.

The average lifespan of this frog species is 5 to 10 years.

These frogs make loud rasping or snoring sounds that resemble the call of Southern Leopard frogs. They mostly call during night. Sometimes they make a high pitched screaming escape call to deter predators.

These large frogs are easily available in pet shops in North America. However, it is not ideal to keep them as pets because their toxic skin secretion can cause some health problems for humans like skin and eye irritation and even asthma. Young children should not be allowed to keep them as pets. One should never release a pet Cuban Tree Frog in the wild as it will have detrimental effect on many local frog and lizard species. Here are some important information about the housing and caring of these frogs:

Housing: A 20 inches × 24 inches × 10 inches tank is ideal for one Cuban Tree Frog. They should be provided with lots of basking and hiding places like large pieces of driftwood and live or artificial plants. These excellent climber frogs might escape unless the top of the tank is securely covered.

Water Requirements: A small dish of clean water should be placed in the tank. These amphibians like to soak in water to hydrate their skin. They do not require large amounts of water as they do not swim. One can use regular tap water treated with water conditioner or bottled spring water. It is advisable to change the water every day.

Temperature: It is not recommended to allow the tank temperature to go much lower than 70 °F to prevent the Cuban Tree Frogs from going into hibernation. They can tolerate temperatures as high as 88 to 90 °F.

Feeding: They eat almost anything that moves and fits into their mouth. One can feed them with crickets, flies, worms, slugs and cockroaches. Adult frogs should be fed every two to three days while juvenile frogs eat every day. They should be provided with vitamin and mineral supplements at least once every week.

Temperament: It is recommended not to keep more than one Cuban Tree Frog in a single tank. They are known to feed on other frogs and lizards including their own species. So, they should never be kept together with other pet frogs and lizards.

They are an amazing species of tree frogs with interesting appearance and behaviors:

This species is included in the “Lest Concern” category by the IUCN. They can directly impact the ecosystem of a place by eating lizards, frogs and snakes posing a threat to the bio-diversity of these places. This invasive species even caused the native tree frog populations to decline.

Cuban Tree Frogs are often considered to be a troublesome species of tree frog. They pose serious threats to the ecosystem of many US states. However, none of these facts have prevented these poisonous frogs from becoming a popular choice of pets.

Here are some images of these tree frogs: 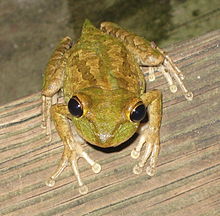 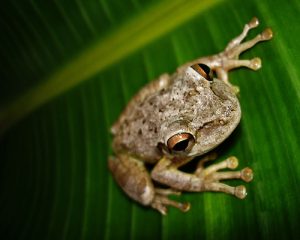