The Clouded Leopard is the smallest of the big cats and is not a close relative to the Leopards. This Asian feline is an evolutionary bridge between the small cats and the big cats. Studying these solitary carnivores is still an obscure topic for the scientists mostly because of their natural inclination of living concealed from view. The clouded leopards found in Southeast Asia are genetically different from the Sunda clouded leopards (Neofelis diardi) that dwell in Sumatra and Borneo. These two species were isolated only in 2006. 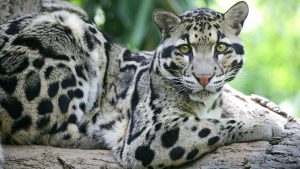 Skin/Coat: Short haired that can be tawny to orange-yellow to darker shades of gray and brown, with black ring markings that are dark in the center, with two black bars on the neck.

Head: The structure of the long skull has given the head a slim shape.

Claws: Consisting of sharp nails that are retractable inside the toe skin.

Tail: Very long, attaining a length of up to 65 cm. 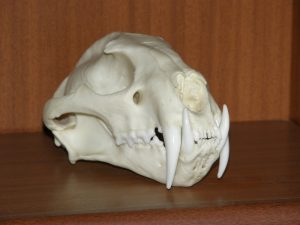 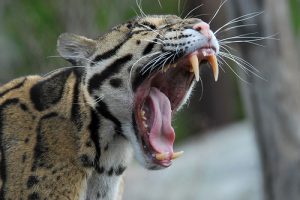 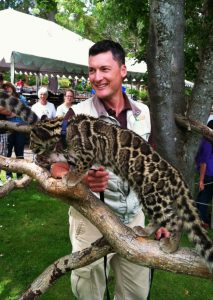 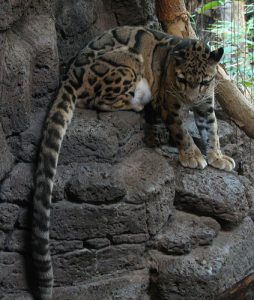 The life span of those living in the wild is not known. The captive animals have been recorded to be living up to 17 years.

The clouded leopards are spread across the countries around the Himalayas viz. India, Nepal, northeastern and southeastern Bangladesh. In India, they are found in northern West Bengal, Arunachal Pradesh, Tripura, Assam, Sikkim, Meghalaya, Mizoram, Nagaland, and Manipur. They are also spread across South of China, Burma, Thailand, Vietnam, Cambodia, Laos and the Malaysian peninsula.

Habitat: Where do Clouded Leopards live

These cats primarily live in the tropical evergreen rainforests. However, if they find suitable prey, the clouded leopards can live in dry forests, scrublands, grasslands or mangrove swamps. The clouded leopard has been found in the higher altitudes of the Himalayan mountain range. 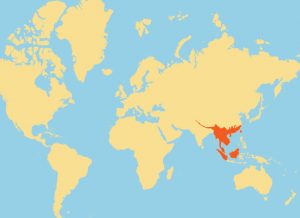 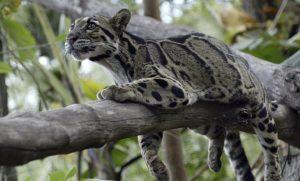 [The last in the list (commonly known as the ‘Formosan Clouded Leopard’), was found in Taiwan. With the last confirmed sighting dating back to 1989, it is now considered extinct.]

The lifestyle of the clouded leopard is very secretive, and hence, very little has been known about their nature. Most of the information has been derived studying the specimens in captivity. 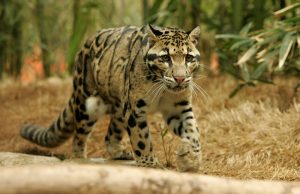 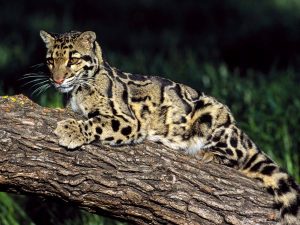 Diet: What Do Clouded Leopards Eat

Because of the difficulty in studying these leopards, not much has been recorded about their eating habits or what they eat. Their confirmed prey-list includes arboreal and rodents like monkeys, squirrels etc., and terrestrial animals like pigs, goats, deer, slow loris, brush-tailed porcupine, Malayan pangolin, young buffaloes, domestic livestock, and even birds, including pheasants.

One sexual behavior of the male clouded leopard is rather strange. They are usually aggressive during mating and would often bite the female on the neck severing her vertebrae during courtship. The female, being almost half the male’s size, is powerless to resist, and would often die.

In captivity, the male-female compatibility is a crucial part. With the ‘estrus’ lasting for about six days (and the estrous cycle lasts for 30 days on an average), the pair would mate multiple times for a few days. After the period is over, the male deserts the female to give birth to the kittens after a gestation period of 93 ± 6 days and raise them up. The average age of reproduction in both males and females is 26 months. 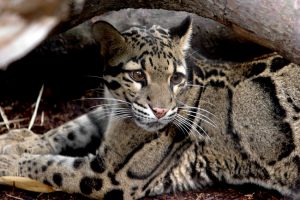 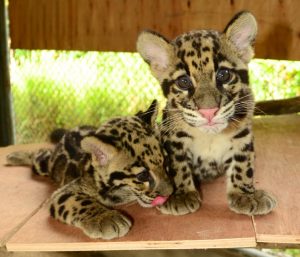 The litter size of the clouded leopard is one to five, but mostly three. Like most kittens, the babies are mostly helpless and blind, and gain vision within ten days from birth. They are born around 170 grams and need constant support and care of the mother until they are three months old. The cubs are born with solid dark coat, devoid of the adult cloudy patterns that they only develop after attaining six months of age. It is believed that the mothers hide their babies in dense vegetation before leaving for hunting. However, not much evidence has been found to support this theory. At 20 to 30 months of age, the baby cats are ready to strike the prey on their own. 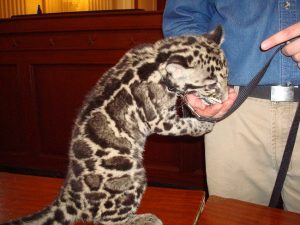 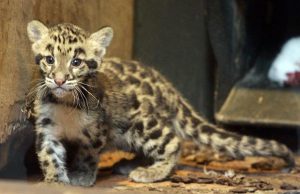 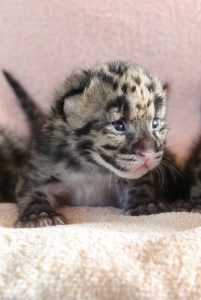 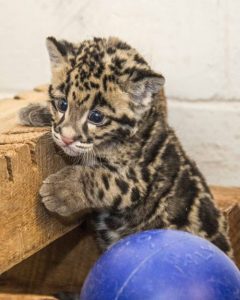 In their natural environment, the clouded leopards are near to the top of the food chain, and have no natural predators, except occasionally for tigers and leopards, who are also its food competitors.

These cats are not far from being ‘Endangered’. The main threat of these canines is the humans. Humans have long been hunting down these big cats for their meat, teeth, bones, and their beautiful pelts, even though hunting these cats has been made illegal in most of the countries they are found.

Deforestation (by humans) and resultant loss of habitat have also served as big factors to their threatened existence. 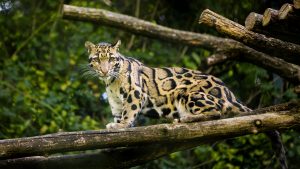 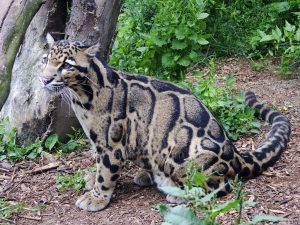 With a decreasing population trend, the population size is considered to be lesser than 10,000 mature individuals. In captive, the total number of these cats is about 222.

The IUCN 3.1 has categorized the clouded leopard under the ‘Vulnerable’ species list.