The Bush Dog, also known as the Savannah Dog, is a species of rare canids and a close relative to the African wild dog. It is a distinctive member of the ‘dog’ family. However, they are different from the other fellow species in the sense that, they are smaller than most other members belonging to the family. Also, they are often found in the rainforests unlike the majority of the canids of the world that usually live in open prairies, savannas, and even in the Arctic region.

Body: The body is slightly elongated with short legs and tail, while the structure being about the size of a pet terrier.

Feet: Unlike most other canids, they have webbed feet, with the paws ending in sharp claws.

Head/Face: A broad forehead with their relatively longer muzzle ending in a black snout (nose tip). The eyes are small, dark and rounded.

Tail: Short but thick, covered with long, smooth hair and having a length of 13 to 15 cm. 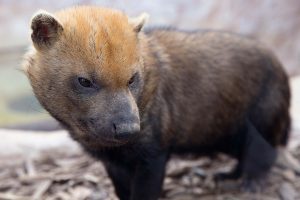 Fur/hair/coat: The entire body is covered with long light to dark brown to tan hair, with the feet and tail hair being darker than the rest of the body.

Teeth: Sharp and continuous dentition with the canine teeth being slightly longer than the rest.

Sexual Dimorphism: The males and females look alike, except that, the males tend to be a bit heftier.

Bush dogs can live for up to ten years in captivity. Their longevity in the wild is not known.

They are scantily spread from Panama and northern parts of South America, south of southern Brazil, Paraguay and north-eastern Argentina, as well as west to Bolivia, Ecuador, and Peru.

These canines prefer lowlands, semi-deciduous, and seasonally-flooded forests, but are also fond of cerrado and wet savannahs. Whichever site they choose, they are always close to water bodies. 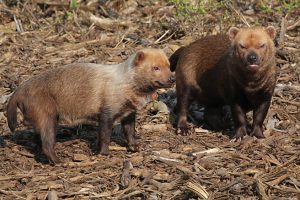 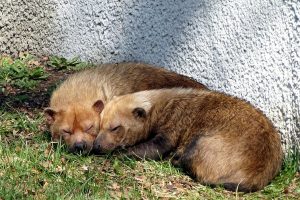 Bush dogs are spread across their range in three distinct subspecies, viz.:

Little is known about their nature in the wild. Bush dogs are terricolous (ground dwelling) canids that are primarily diurnal in nature. They remain active all day along with other members of their packs, including the females. However, some speculate that they are nocturnal.

A pack of bush dogs may consist of up to 10 animals. This means that they are social creatures, and unlike many other canines, both the sexes can cohabitate without internal (i.e., within the group) quarrels. They are territorial, and the pack members mark their territory by urinating.

However, a dominance hierarchy is usually established. Bush dogs are highly vocal animals and use high pitched peeping sounds/calls as vocalization to communicate with and locate the members of their packs in the woods.

The carnivorous bush dogs prey mostly upon rodents like paca, agouti, and capybara. However, a pack can capture larger mammals like peccary and tapir, or birds like rhea. 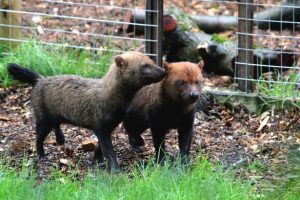 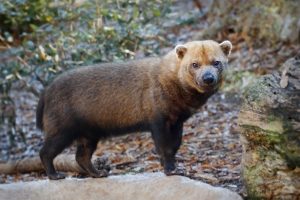 Pictures of a Bush Dog

Nothing much is yet known about their mating system; however, researchers believe that they are most probably a monogamous species. In a group/pack, only the alpha pair breed, with the alpha female using hormones to resist the other female members from becoming pregnant. Estrus cycle in a young bitch begins after they are about ten months old, and usually lasts for 4.1 days in an average.

By this time, the pup is separated from its mother and other females and pair with the males. A single litter can have anything between three and six puppies (rarely one or two, too) at a time after the female’s gestation period of 67 days. The average time period between births is approximately around 238 days.

The mammals create dens in the burrows or hollow tree trunks wherein the nursing females live with the offspring while the males move out to hunt for food for the entire family. The juveniles weigh between 130 and 190 g each and are taken care of by both the father and the mother for eight weeks to 5 months. Newborns usually wean at around four weeks, reaching the age of sexual maturity after a year.

Bush dogs have no natural predators.

The bush dog is the only living species in the genus Speothos, with their population degrading at an alarming rate mainly because of factors like farming and development, leading to habitat destruction, as well as poaching. 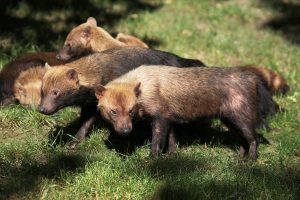 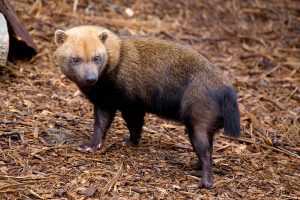 The IUCN 3.1 has enlisted these animals under their ‘NT’ (Near Threatened) list.