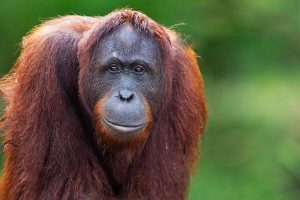 Physical Description: What does a Bornean Orangutan Look Like

Size: The head-body length of the male is 97 cm; for the female it is 78.
Weight: Males weigh between 60 and 90 kg; females weigh 40 – 50 kg.
Fur: Coarse coat hair with a shaggy appearance; rusty brown in color.
Body: Shape of body is distinct. Face skin is bare and black in adults, but often pinkish around the eyes and muzzle in young.
Flanges: Some males have flangs (cheek pads), based on which two varieties have been distinguished – the ‘flanged’ and ‘unflanged’.
Arms and Feet: Arms are very long reaching up to 2 meters. Both hands and feet are grasping.
Sexual Dimorphism: Males are larger and have check pads, unlike the females.

In the wild, the Bornean Orangutans live for 35 to 45 years. But in captivity, they live longer – for up to 60 years.

Habitat: Where do Bornean Orangutans Live

The Bornean orangutans primarily live in lowland areas, and in hilly tropical rainforests at elevations of up to 800 metres above sea level.

Distribution and Classification of Species 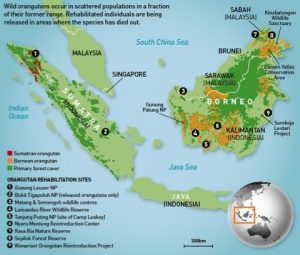 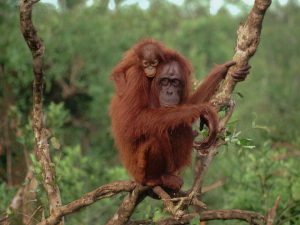 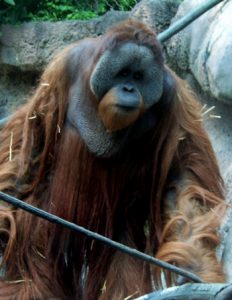 The Bornean orangutan is diurnal and arboreal. Their hand-like feet make walking way too difficult. While all Bornean orangutans display lonesome behavior, but they are not territorial. However, the males display warning gestures to ward off sexual competitors only during mating season.

Females sometimes roam around with the babies for foraging in small groups of 6 or more before when the trees start fruiting. Brachiation (moving from branch to branch hanging by their hands) is common in juveniles. The adults would usually move around quadrupedally, or at times bipedally. Unlike other great apes (viz., humans, chimpanzees, gorillas), they would walk on their fists rather than the knuckles.

Every night, they build nest platforms 40 to 60 feet off the ground level for sleeping, using vegetation to keep the bed soft. They cannot use their thumbs, but instead, the other fingers and palm to pluck fruits. These animals also can’t swim – a disability that has limited their boundaries up to the rivers and other water bodies within their range. 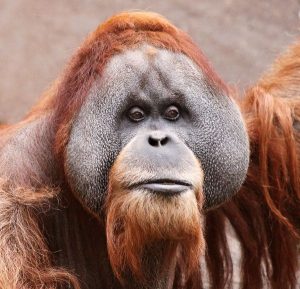 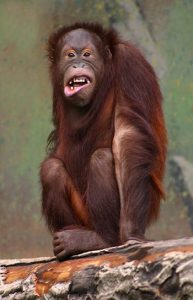 The otherwise lonesome male Borneans indulge in temporary socialization with the females during mating season. While choosing a partner, the males emit a peculiar sound or call audible up to a distance of 3 km. The females would accept a partner if only the male has ‘jipeks’, or cheekpads, which they develop when they are in their 20s. 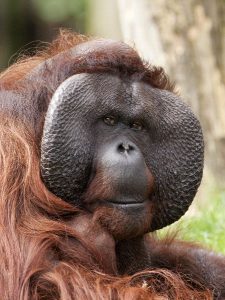 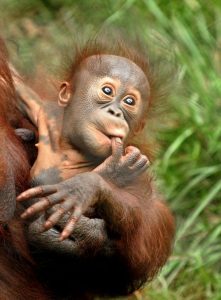 Females attain sexual maturity between 6 and 11 years, when they experience the first ovulatory cycle. The estrous cycle lasts for 22 days to one month. Age of pregnancy is 14 to 15 years, while the maximum age of menopause is 48.

The mothers would care for the babies more often than the father, nursing the offspring every 3-4 hours for up to 6-7 years. By age 4-months, they learn accepting tender food from their mothers’ lips. During the first year, the young ones move around clinging to their mothers’ abdomen by gripping the fur. Usually, the baby orangutan is weaned at about 4 years. However, they would always stay within the sight of the mother. 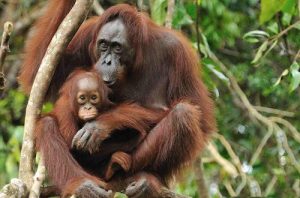 The young orangutans reach the age of maturity at around 8 and learn living independently. However, the young females would continue to stay with their mothers until they are teens, and learn the essential parenting skills from their mothers by observing how the younger siblings are taken care of. This is essential, since without this lesson the young females will not be able to rear their own babies. 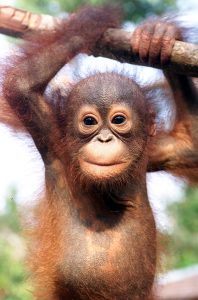 Diet: What Do Bornean Orangutans Eat 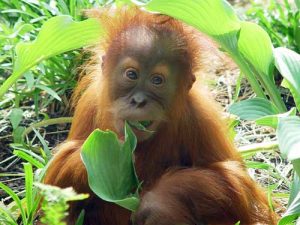 These intelligent hominids use different tools in daily life to make task easier. They would use large leaves to hold water while drinking, while during the dry months, they would chew leaves to use them like sponge to soak moisture from tree hollows. 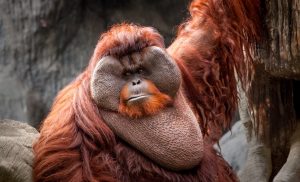 They have even been noticed using spear-like branches to catch fish, or long twigs from trees to dig out insects from their holes for consumption. During the rains, they would hold large branches of leaves like umbrellas while travelling, or use leaves to wipe off their faces.

Predators: What Eats a Bornean Orangutan

While their main predators of the Sumatran Orangutan are tiger and leopard, the Bornean Orangutan’s only predator is the leopard since there are no tigers in Borneo. The juvenile and young ones are more vulnerable to predation. 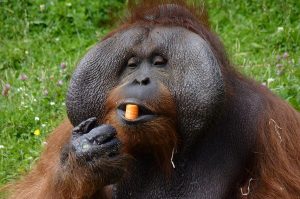 The Bornean Orangutan is a threatened species, and the IUCN 3.1 has officially categorized them under the ‘EN’ (Endangered) species list.