The American pika is a comparatively smaller and cuter relative of the lagomorph family of hares and rabbits. These innocent mountain rodents thrive best in cold climates and prefer to dwell in high altitude mountains and alpine meadows especially of the American west. Strict herbivores, these American pikas are hardworking animals that are often spotted gathering flowers and plants for storage in winters. These montane mammals are forecasted to fall victims to global warming in the near future. 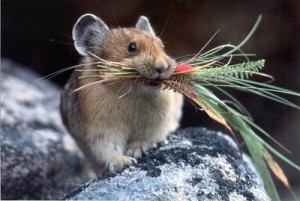 Amongst the pikas this particular species of American pikas are diurnal creatures.

The American Pika belongs to the lagomorph family of hares and rabbits. This adorable mammal has a small body that is almost oval in shape. At the first glance the American pika seems to be lacking a tail. However the truth is that it has one of the longest tails amongst lagomorphs that is somewhere hidden amidst its furry body. Habituated to high altitudes and cold climatic conditions, the body of the American pika is covered with thick fur, grayish brown in color. This fur grows thicker during the winter allowing the animal to combat the chill. Its body can be roughly estimated to be 6 to 8 inches in length. The weight of the American pika is somewhere around 6 ounces or 170 grams. American pikas may be of different sizes depending on various factors. In the case of populations identified with sexual dimorphism, you will often observe the males to be slightly bigger in size compared to the females.

Their tiny hind feet are barely measured to be 25 to 35 mm. Apart from the black pads behind the toes the soles of the pika’s feet are usually covered with dense fur. This montane mammal has big, dark ears compared to its tiny button eyes. 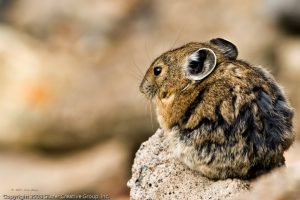 The American pika is known to reside in areas that are generally rocky with a significant mass of loose soil. Such places prove to be safe for their nest and shelters.

Boulder fields set at high altitudes and alpine meadows with low grasses are also inhabited by these cute looking montane mammals. It is very difficult for American pikas to adjust in diurnal temperatures that are high. As such they prefer to dwell in sea level areas. It is also rare for pikas to dig burrows. Sometimes you may even spot them dwelling in mine tailings or near scrap lumber piles.

The American pika is found in the regions of south-western Canada and western U.S. These cute lagomorphs can also be spotted in Oregon, Colorado, Utah, New Mexico, Idaho, California and Montana.

There are certain interesting facts about the American pika that have been incorporated in the points below.

The American pika is a strict herbivore which thrives on plants of different kinds. Its diet is mainly composed of green grasses, thistles, fireweed and sedges. This vegetarian diet preferred by the American pika has ahigh water content which meets the water requirements of the montane mammal. However the American pika drinks water whenever it is available.

When it comes to feeding, the American pika follows two particular styles. The first is the conventional way in which all animals eat food; instantaneously on the spot. In the second style the American pika does something which is quite smart and interesting. It accumulates grasses and thistles in order to store it for the winter time. As such these small little creatures build haystack with the stored food. This phenomenon is termed ‘haying’.

The American pika is one such animal which is active throughout the year. Thus it has to make arrangements to keep the haystack safe and protected from natural calamities like rain etc. However, the vegetation begins to dry after a certain period of time. The American pika spontaneously shifts the dried vegetation in a dark, deep den somewhere in the rocks. It feeds on cushion plants and lichens a soon as the stored food supply gets over.

The male American pikas have been observed to be more active in haying, compared to females.

The breeding season of the American pikas occur in spring. In fact the months of May and early June mark the peak breeding time for these animals. However it is important to remember that American pikas are seasonally polyestrous meaning they are subject to more than one estrus cycle per breeding season.

The gestation period is limited to 30 days. The female pikas can give birth to about 1 to 13 babies at a time. Soon after giving birth to the first litters, the females are ready to breed again resulting in a second litter by summer end. It is not unusual for pikas to have up to five litters in one single year as in the case of the Afghan pika. Females take care of the babies intensively for about 18 days. The baby pikas are known to grow quickly. They acquire the adult size in a maximum period of 40 to 50 days.

The American pika has an average life span of 3 to 4 years. Some can even live up till 6 years.

American pikas are diurnal creatures, active only in the daytime. These animals are not accustomed to hibernation in the winter season.

The pikas exhibit an interesting phenomenon termed ‘haying’, in accordance to which they collect food in haystacks for the winter period.

Early summer and spring marks the breeding season of these animals. The months of May and June are the time when the pikas are most active sexually. It is normal for pikas to litter almost about five times in year. The period of gestation extends for thirty days.

Pikas are observed to be colonial in nature. A pika will be allotted its own territory within each colony.

The pikas communicate with one another with the help of short squeaking alarm calls.

When attacked by predators like hawks and eagles, a pika will produce strange short squeaking sounds. However it remains silent when attacked by a weasel owing to the weasel’s ability to follow the pika back to its burrow. 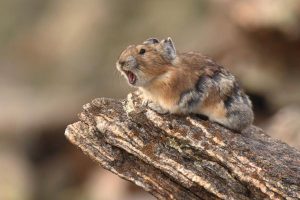 Scientific research forecasts the American pika to fall a serious victim to the threats of global warming. These animals are sensitive to climatic change. Habituated to cold climates these innocent rabbit like mountain rodents are challenged to migrate due to the emanation of heat trapping gases like carbon dioxide etc. The rising climatic conditions and temperatures have brought the pika’s surrounding environment crumbling down; the particular plants they are used to feeding change, insulating snow packs also shrink and so do the alpine meadow homes of these creatures. Summers are shorter thereby reducing the haying or food gathering time for pikas. In fact the pika population of the Great Basin area has already been reported to be subject to extinction as an outcome of global warming.

It was decided that by specifying the American pika under the list of endangered species would spread awareness to protect these innocent creatures vital for nature and ecology.