Snowshoe hare is an amazing species of mammals. Both looks wise and traits wise this species is awe-inspiring. Found in cold temperature zones of the world, this species is designed to cop up with the cold and the snow. This incredible species have many traits that make it outstanding amongst the usual mammals.

Looks : Snowshoe Hares are bigger in size than rabbits. They have a thick coat of fir.

Limbs : These hares have huge hind limbs and big enough forelimbs also. Their feet are furry, helping them to hop around without sinking in snow-bed.

Body : During winters body of Snowshoe hares are covered with thick coat of snow white fur. As it approaches summer-time, their fur-cover color changes to brownish.

Size : An average snowshoe hare is 16cm to 20cm in height.

Weight : An average snowshoe hare weighs about 2lbs to 4lbs. 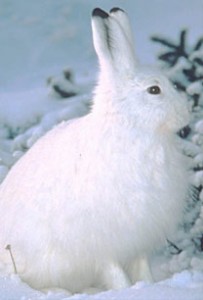 Snowshoe hares species are to be found all over Canada, New England, south from the Rocky Mountain, and Appalachian Mountain. This species is abundantly found in the northern countries of New Hemisphere.

Snowshoe hares are herbivorous. They feed on grass, flowers, greens, etc. in summers. In winters it is hard to find greens around. That time they survive on buds, soft bark, and twigs.

The Snowshoe hare species is threatened by humans occasionally for maritime hunting and even diet. But the biggest threats to this species are the carnivorous ones of the animal kingdom, both mammals and birds. The list includes owls, hawks, and eagles amongst birds. Amongst the bigger ones there are lynx, wolves, coyotes, foxes, mountain lions, martens, weasels, and bobcats.

Snowshoe hare have many special features that help them adapt to the environment as well as sense danger and threat from carnivorous species of the animal kingdom. 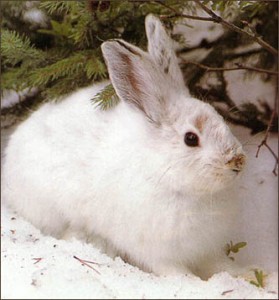 Snowshoe hares prefer lowland areas of spruce-fir woods, and mixed hardwoods. They also inhabit in forest burns, blown-downs, and clear-cuts. There is one thing about their habitat preferences that is they tend to stay away from open spaces. They need hide out kind of places.

Snowshoe hares reach reproductive maturity in the very next spring from their birth since they have a very short life span. They breed from March beginning to August end. The male snowshoe hares chase the female ones through the woods and then purse the females to mate. 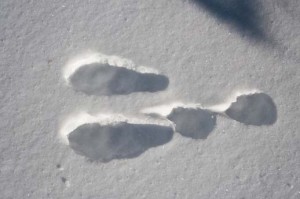 The gestation period lasts for about 36days. The female Snowshoe hares give birth to 3-4young ones. The nascent born ones are precocial, with open eyes and weigh 2 ½ ounces. They start hopping soon after their birth.
Male snowshoe hares compete amongst themselves for the female ones. Each male hare might mate with many female ones.

Snowshoe hares do not have a long life span. It varies between 1year and 3years.

According to IUCN reports it comes under the least concern category. The species do not suffer any major threat apart from the natural ones, like being preyed by other carnivorous animals.

Snowshoe hare is a very interesting species of animal kingdom. Find out some interesting facts about the hare below:

Take a look of the amazing Snowshoe hare species in the pictures below. 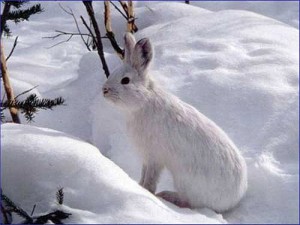 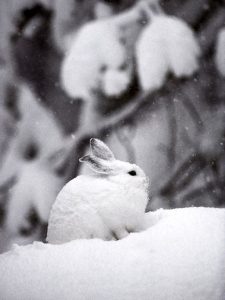 One response to “Snowshoe Hare”