The American Goldfinch is a small, bright flavescent North American bird that is easily identifiable for its remarkable plumage and bold wing patterns. Also known as the eastern goldfinch, these noisy birds are interesting to watch, as the birdwatchers enjoy seeing American goldfinches at their feeders. These birds have a wide sexual dimorphism with the males looking much more brilliant and colorful than the dullish females. These flippant little creatures are cheerful and energetic by nature. They are indigenous to the region where they are found. 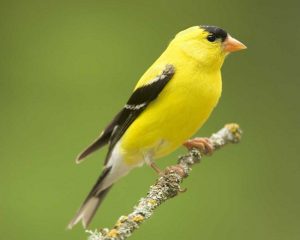 Weight: These very light-weight birds weigh anything between 0.39 and 0.71 oz.

Feathers/plumage: The adult males turn bright yellow during springtime or early summer with a black forehead. The females are much towards the dull side, though, with a dull yellow belly and an olive back. But during wintertime the males lose their bright colors and turn pale.

Wings: Both wings are black with white streak patterns.

Tail: The tail length is 1.7 to 2.0 inches, with white patch marks above and below the tail feathers.

Eyes: Eyes are small, round and black.

Bills/Beaks: Their beaks are strong, small, and cone-shaped with a pinkish tone round the year. The pink hue turns to a bright orange hue in both sexes during spring.

The lifespan of the bird is around 3 to 6 years in the wild. 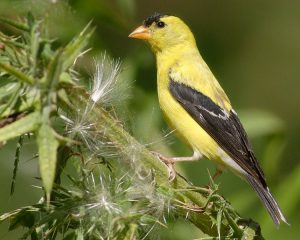 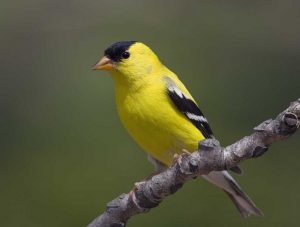 The American Goldfinch is commonly spread all throughout the United States of America during the summer months. However, during winter, they are also found in parts of Canada. A scarce population has also been noticed in parts of Mexico.

Habitat: Where do the American Goldfinches live

The finches are mainly found in areas where there is an abundance of plant seeds for them to feed. They are spread all over the open woodlands, roadsides, floodplains, orchards, gardens, areas overgrown with grasses, and the weedy fields. During the winter months, they are also frequently seen in the backyards and at man-made bird feeders. 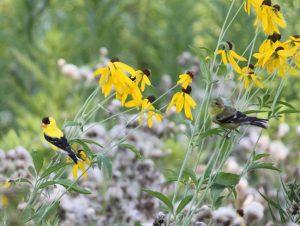 By distribution range and physical attributes, the American goldfinch has been subdivided into four subspecies:

The American Goldfinch is gregarious and garrulous. They would live, move and forage in small flocks while constantly chirping and interacting with each other. They are active and acrobatic, moving around in a riffling, bouncy pattern, emitting shrill call notes on the upward strokes.

The birds are quite sociable and would often gather in flocks with other species of birds. Though they are not mimic birds, but while other fellow finches are around, they copy their call and fluff up their feathers. These birds are migratory, but cover only short distances. They move towards the south during wintertime, depending upon how farther north they live.

During nesting, the male would act aggressively towards other males trespassing on its territory, while the female would do the same with other females. However, when the eggs are laid, the aggressive attitude spontaneously subsides. The finches are also not aggressive towards the predators. However, they would only react using their alarm call. 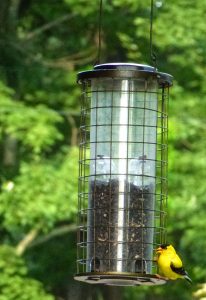 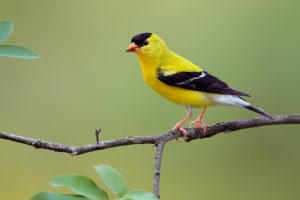 Contact calls that sound like “tsee-tsi-tsi-tsit” or “po-ta-to-chip” are the commonest. Their song is common during the summertime, and sounds like ‘rambling’ or ‘warbling’. They emit calls including per-chik-o-ree or a descending ti-di-di-di during flight for drawing each other’s attention. They can easily communicate with each other during perching as they can while flying. The distressed Americans would emit a different sound, while the babies would make a begging tone when hungry.

Diet: What Do American Goldfinches Eat

Primarily, these finches are herbivores, or to be more precise, granivores. They mainly live on the seeds of plants as the main source of their food. Seeds of plants include weeds grasses and trees, like thistle, ragweed, mullein, cosmos, teasel, dandelion, goatsbeard, alder, sunflower, etc. Other than seeds, they also cherish berries, maple sap, and tree buds. However, occasionally, they also prey upon animals, like small insects, and feed the same to their young ones as a source of protein.

Goldfinches begin breeding in during late summer when most songbirds are finished with their breeding. This breeding nature has classified them as one of the latest nesting birds.

During mating season, the goldfinches live in segregated colonies. The brightly-colored adult males mostly communicate visually for attracting their mates. The primary instruments to attract their partners are their feather colors as also a few special flight patterns. These finches are monogamous; however, they would pair and copulate with a new mate during the next breeding season. 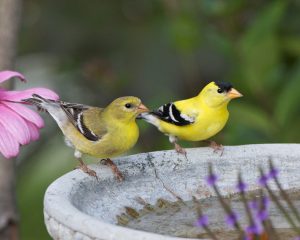 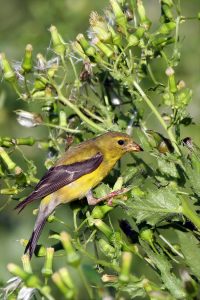 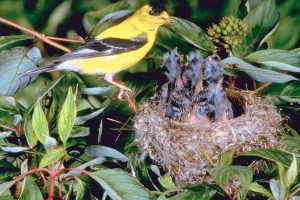 The credit of building the nest goes entirely to the female, although the males do help to gather materials for constructing the nest. The nests are mostly cup-shaped, and are built mostly of weeds, bark and grasses. They build the nest mostly in the higher branches of the deciduous trees.

The clutch size of the goldfinch is generally 2 to 7. As the female takes her time of about 12 to 14 days to incubate the eggs, the male brings it food. The eggs are norrrmally dull white, often with spots in red and brown around the large end. 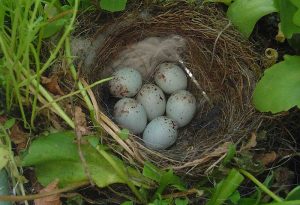 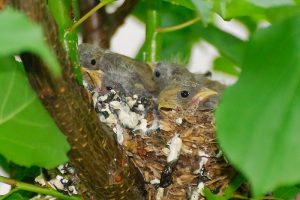 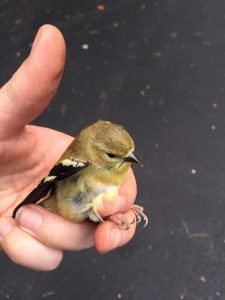 As the eggs hatch in about two weeks, the females brood the baby birds for the few initial days of after they are hatched out. Both the mother and the father bring foods to the young ones. The infants are born helpless and naked, with only a nominal amount of gray downs, and open their eyes after about a week. They take around 12 to 17 days to leave their nest. Nonetheless, both the parents would continue feeding their youngs for a few more weeks. 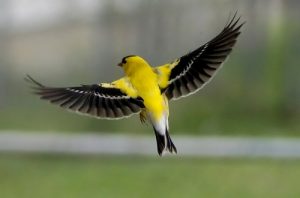 The American Goldfinch is not a threatened species. The IUCN 3.1 has categorized them under the ‘LC’ (Least Concern) species list.

One response to “American Goldfinch”