Star nosed Moles are the only member in the Condylurini tribe and the Condyluraone genus. These moles are among the most interesting creatures in existence with some unique qualities and abilities. These virtually blind mammals have earned their name from their star- shaped nose which works as a sensory organ.

Find out here the description of this amazing species.

Color: The Star Nosed Moles have a blackish brown appearance.

Weight: The average weight of an adult Star Nosed Mole is 55 gm.

Body: Their body is covered in black-brown water-repellant fur. They have a long tail.

Legs: These moles have four large legs covered in scales.

Head: They have a pair of beady eyes that are not developed enough to see making these mammals nearly blind. They also have 44 teeth.

Nose: The most unique feature in the appearance of these mammals is their nose which is larger than other mole species. They have 11 pairs of fleshy pink tentacles at the end of their snout that make the nose look like a star.

The main distribution range of these animals extends to the north-eastern US and eastern Canada. They are found in places like Labrador, Quebec, Minnesota, Indiana and South Dakota. These mammals can also be found along the Atlantic Coast and in the Appalachian Mountain area. The Atlantic Coast range extends to south-eastern Georgia.

They are semi-aquatic animals preferring low wet areas. The tunnels of these moles often lead below water surface. They can be found in wet meadows, marshes, banks of streams, lakes and ponds.

These mammals have a very interesting behavior pattern:

The nose is the principal sensory organ of the Star Nosed Moles as they cannot see. The tentacles covering the edges of the nose contain 25,000 highly sensitive touch receptors (Eimer’s Organs). German zoologist Theodor Eimer was the first person to observe these receptors in the European moles. Other species of moles also have the Eimer’s Organs, but in fewer numbers.

These completely hairless tentacles help them in hunting. They identify insects, invertebrates or any other consumable substance around them by the help of these tentacles. They hunt by touching their prey. It takes them very little time to decide if a substance is edible. The whole hunting process takes an average 230 ms (millisecond- a thousandth of a second) to complete once they find their prey. 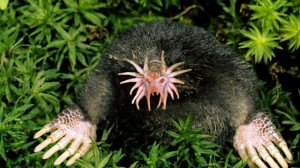 The breeding season starts in mid-March and continues through April. They are known to reproduce once every year, but the females may reproduce a second time if their first litter is unsuccessful. One litter may contain 2- 7 offspring.

These mammals are born with closed eyes, ears and folded tentacles. These organs become functional after two weeks. The young creatures become independent 30 days after their birth. It takes 10 months for a young mole to reach full maturity.

The exact lifespan of the members of this species is unknown. But they live approximately 3-4 years in the wild.

Many raptors, mammals and reptiles including hawk, owls, skunks, weasels, minks and snakes prey on these moles.

Their noses are their best adaptive feature that helps them to survive in wild:

They are given the ‘Least Concern’  status by the International Union for Conservation of Nature and Natural Resources (IUCN). It means that there are no immediate threats to their existence.

Read on to know some amazing facts about these small animals:

Here are some images of these mammals: 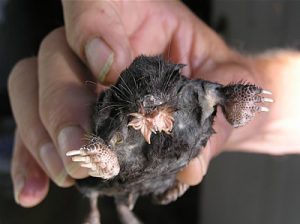 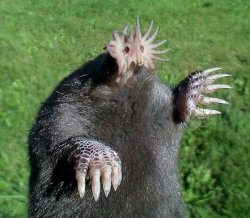