A Spring Peeper is a tiny and a rather interesting type of a tree frog. Their name itself is reminiscent of their distinct sleigh-bell-like call that the males emit with the onset of spring.

These small chorus frogs are mostly found in wooded areas and marshy lowlands throughout eastern USA and Canada. It is often difficult to spot them as they camouflage themselves with the background.

Similar to most amphibians they can survive and live both in land and water.

The Spring Peeper is a tiny frog distinguished by the dark cross forming an X shaped mark on its back. In fact it acquires its name ‘crucifer’ because of this mark. In Latin terminology the word ‘crucifer’ means cross bearer. 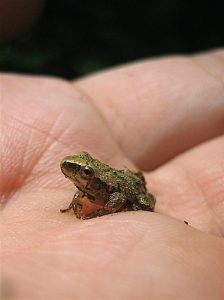 Color: These creatures may be tan, gray, olive green, yellowish or brown in color. Females are duller in color compared to the males. The male spring peeper has a darker throat.

Size: This tiny animal is barely 1-1.5 inches long. It weighs around 3.1grams to 5.1 grams. Males are usually smaller than the females.

The Spring Piper has earned its name by virtue of its high-pitched call. A chorus of such calls is often heard by late afternoons during spring. In fact this call has often been compared to the sound produced by young chicken even though the spring piper’s call is distinctly louder.

The vocal sac situated by the throat of this tiny frog is responsible for the production of the high-pitched call. This vocal sac is observed to expand and deflate somewhat like balloon, thereby creating the peeping sound. However, only the males are capable of producing this sound which they use to attract the attention of the females.

Spring Peepers reside mostly in woodlands and swamps, especially the ones in proximity to ephemeral and semi – permanent ponds. Their preference of this particular kind of habitat is closely linked to the aquatic environment that is vital and necessary for the eggs and tadpoles.

These amphibians are capable of withstanding extreme cold temperatures; sometimes as low as -8 Degree Celsius.

They breed in a variety of wetland habitats that may include temporary pools, burrow pits and farm ponds. However they are observe to hibernate under logs of wood or loose tree barks.

The Southern Spring Peeper is mostly found in the regions of northern Florida, southeastern Georgia and United States. However its northern subspecies occur throughout United States spreading east of Mississippi up to Canada. 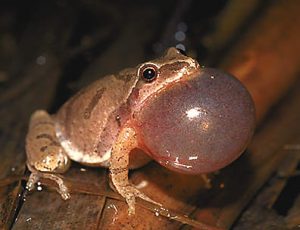 Spring Peepers are nocturnes that prefer to feed up on smaller invertebrates like ants, flies, beetles an spiders. These small carnivore frogs avoid climbing high trees and usually stick to hunting in low vegetation.

There are two known subspecies of the Spring Peeper. Both the subspecies bear a close resemblance to one another except for a certain mark on the belly of the Southern variety.

This particular species inhabits most regions of eastern USA and Canada.

This species are distinguished by the dark marking which they bear on their belly. These Southern frogs are strictly found in southern Georgia and northern Florida.

The breeding season of the Spring Peepers belonging to the southern areas begins from October and extends up to March. However the ones home to the Northern areas breed in the time period from March to June.

The males attract the females by their loud and distinct call. The female in turn select its mating partner by prodding him gently. Their mating act is characterized by the male clasping against the females’ back throughout the entire act. In fact the male remain in the same position an accompany thee females till the time the female goes to deposit her eggs in the pond.

A female spring peeper is capable of laying 800-1000 eggs that are brown in color. These eggs are either deposited in the pond water, individually or in groups. Often these egg clusters occur in the mud or may even be attached to vegetation that lies submerged under water. The female may deposit the eggs in tree hollows filled with fluid or micro-pools and smaller water bodies as such.

The eggs hatch after 6 to 12 days with the emergence of tadpoles or larva frogs. For the next 90 to 100 days, these tadpoles are observed to be consistent in their aquatic form. However this period of larval incubation depends on various factors like weather conditions, the time when the eggs were laid etc. and as such can last for a shorter duration of 45 to 65 days as well. The tadpoles mostly feed on algae, bacteria and dead vegetation. However these tiny creatures face a constant threat by their predators that may include bigger fishes, salamanders and white snakes.

They disperse into the swamp woodlands shortly after their metamorphosis into frogs.

The species can adapt itself to the worst of freezing weather conditions. During winters some parts of the body of this tiny frog begins to freeze. But its liver produces glucose which is an anti-freezer. The glucose content is transported to some vital parts of the peeper’s body like the heart and lungs. As such, the tiny frog survives even when other parts of its body are crystallized into ice.

The Spring Peeper has an estimated life span of 3 years.

These widespread frogs do not come under endangered species. However continued loss of their natural habitats especially the wetlands has hit the population of these creatures. Spring Pipers are enlisted under threatened species in the states of Kansas and Iowa.

Here are some images of Spring Peepers: 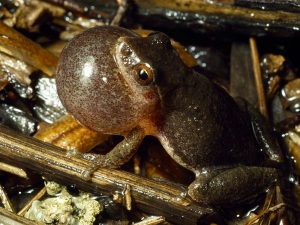 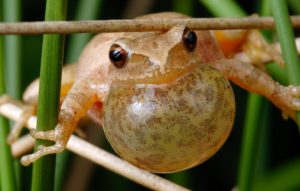 One response to “Spring Peepers”