Spotted Bat is a species of bat from the family of Vesper Bats. The Spotted bat is named such because of its 3 white spots found over each shoulder and on the backside. This species of bats is considered as America’s one of the most striking mammals. Spotted Bat is relatively a large bat and looks very different from other species of bats. Their scientific name denotes their looks. The term Euderma means good skin and maculatum means spotted.

The Spotted Bat is the largest bat of North America.

Color: Spotted Bat has black fur on back. Two white spots are there on the shoulders. It has a white spot on the rump and the portion below is covered with white fur. There are small white patches under each ear. The bat is pale colored. It usually has a combination of grey and pink. Ears and membrane are pinkish in color. The face is black colored.

Wingspan: The wingspan stretches up to 14 inches.

Weight: The weight of this bat varies around 16 to 20g. 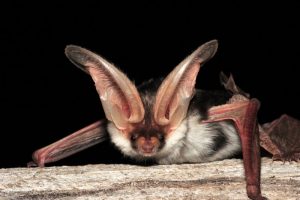 Forearm: The size of forearms extends up to 51 mm.

Fur: The fur of Spotted Bats is long and silky.

Some Spotted Bats migrate from colder to warmer areas during the winter. They also go into torpidity in cold weather. This means that its body temperature will fall to that of their surroundings and its heart rate will slow down.

The spotted bat feeds mainly on insects. It feeds completely on moths though. They rip off the wings of the moth and eat only the abdomen portion. Spotted Bats eat medium-sized moths, grass hoppers, beetles and caddis flies too.

The predators of Spotted Bat are owls, raccoons and dirty dogs. These are some of their few natural predators.

The adaptive features of this moderately large bat are quite attention grabbing. 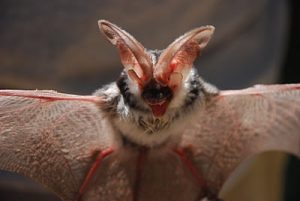 The mating season of Spotted Bats usually takes place during the autumn season. Males in reproductive condition have been found in later half of the summer and after summer. Spotted Bat may mate later in the feeding season when they are heavy and in good physiological shape. Spotted Bats are solitary breeders.

Females give birth to one pup every year. If the spotted bats were “average” small mammals, then their young ones would be born in early phase of winter when bugs are sparse. However, many temperate zone bats have grown the physiological forte of delayed fertilization. The females confiscate the sperm during hibernation so that the sperm does not meet the eggs until spring. Hence, the bat pup is born and weaned during peak insect activity.

Young ones do not have the spots like the adult. The young ones do not have fully developed ears at birth. The newly born Spotted Bat is very small in size. It weighs around 4 to 5 grams, which is about one fourth of the mother’s weight. The pups are born blind and do not have any fur. Mothers look after their pups till they reach approximately 6 months of age.

Spotted Bat is known to live for about 20 years.

Spotted Bat is listed in the category of “Least Concern” by the IUCN.

Find out some of the interesting facts of this docile animal.

Here are some of the astounding pictures of this mammal. 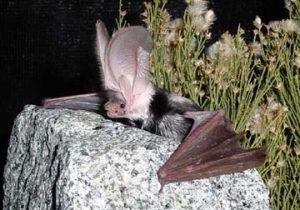 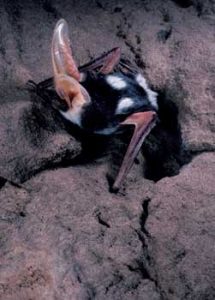 One response to “Spotted Bat”