The Nine Banded Armadillo is a species of the armadillo, and is primarily a timid and armored mammal, that is found in South, Central and North America, in the warm grasslands and forests, and is therefore the most widespread of the armadillos. The armadillo is the state animal in the Texas. It is also known as the Nine-banded long nosed armadillo. It is mainly solitary by nature, a nocturnal animal that can be found in a wide range of habitats. 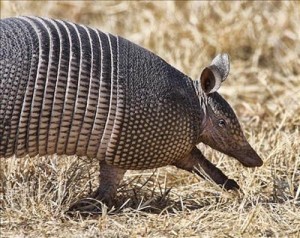 The nine banded armadillo is a medium sized solitary animal. It is quite primitive looking, and has unique characteristics. It has an awkward appearance, yet is an attractive animal with sharp features.

The nine banded armadillo is about 15 to 17 m in length. Its tail measures 15 to 16 inches in length.

Nine banded armadillo is brown and gray in color. Its hairs are yellowish white in color.

They have around 30 to 3e teeth which are peg like, and arranged in simple rows at the back of the mouth. Front teeth are absent. Although their appearance is not very attractive, they are very good swimmers, runners and can walk underwater across small steams very easily. They can jump 3 to 4 feet in the air if they are frightened. They are found dead on roadsides, since they often fall as a victim to the automobiles on the roadside.

The nine banded armadillo inhabit the dense shady woodlands or pine forests. They are found in a warm and rainy environment, mostly in the in those regions that resemble their ancestral home. They are found in Peru, North Argentina and some regions of USA.  They stay in deep burrows during the day, but are more active at the night. They cannot stay in cold and dry environments, since they are only susceptible to dry and hot weather. It is also found in forests and rainforests.  It is an easily adaptable animal, and therefore can easily thrive in any region in open prairies, scrublands and rainforests.  It prefers sandy or loamy soil to stay, so that it can easily be excavated.  They have many burrows, but they up one to bring up their young one.

The nine banded animals are primarily nocturnal creatures. They prefer solitary life, and therefore come out to forage only in the dusk. They are more active on warm weather, and tend to get inactive at night. They separate their territory from the others by means of urine, faeces and waste materials from the scent glands that is located in the nose, eyelid and feet. These animals settle their territorial disputes by chasing and kicking each other. They are also not easily dislodged by a predator.

They have poor eyesight, but an extremely developed sense of smell. They have a habit of digging burrows of very convenient size close to the trunk of the tree. They can also jump up to a height of 3 to 4 feet in air, when they are scared or startled. It can also cross water bodies, since they have the ability to walk underwater. It can float across, by the technique of gulping air into their stomach and intestines. If the water body is shallow, then it can simply walk across it, by just holding on to its breadth for some time.

The nine banded armadillo is a very successful reproducer. The animals reach sexual maturity when they are about a year old. They reproduce almost every year, for the rest of their life. A female armadillo produces as many as 56 offspring in her entire life. This is a very important reason that is contributing to the rapid increase in the population of this animal.

The nine banded armadillos reproduce in a very apt climate, when the weather conditions are very favorable and it is neither too hot, nor too cold. They breed in a stress free environment.

The mating season of the nine banded armadillo is about 2 to 3 months long. The mating takes place in the months of July and August. Initially, only a single egg is fertilized, and later on the implantation is prolonged for 3 to 4 months, so that the offspring is not born in an unfavorable time of the year.

They produce quadruplets at a time. The offspring that are produced at a time are of the same sex because they are developed from the same egg. There is not much difference between the adults and the young ones. The only visible difference is that they are smaller and their armor coat is comparatively short. They are born with their eyes open, and movement is started within a few hours of birth. The young ones stay away from their mothers during the spring season and summer months. 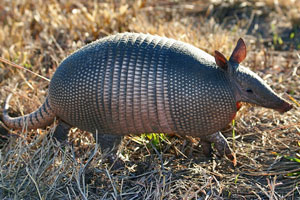 The nine banded armadillos are insectivores. They collect their food by digging the soil with their snouts, since the soil that they select is loose. They also have long tongue, with the help of which they grab ants, grubs, termites and worms. They had peg like teeth. Their tongue is sticky; therefore they can wrap up the insects in their tongue. This diet is accompanied by small reptiles, amphibians and tubers.

The life span of a nine banded armadillo in normal situations and circumstances is about 7 years. But if they are kept in captivity, it may increase up to ten years.

The nine banded armadillo survives in tropical to temperate regions. They have low body temperatures, which is generally 33 °C to 36 °C.

These animals are native to South America. They are now also found in Texas, Kansas, Louisiana, and Oklahoma. They basically look for the soil conditions to live. They cannot reside at a place where the soil is very hard, since it cannot be excavated. They are distributed unevenly over almost the entire range of southern USA.

There are certain drawbacks that the animal causes to the environment. It can cause damage to the roots of plants. But it also provides certain benefits, since it also provide shelter to shunks, burrowing owls, rattlesnakes and cotton rats. They are very useful, since they provide a number of valuable stuffs to the environment. They are hunted for their meat, which has a taste similar to that of pork.

There are some very interesting facts about the nine banded armadillo. Some of them are: 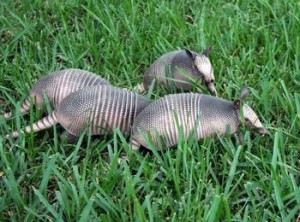 Nine banded armadillos are often used for the research of diseases like leprosy. This is due to the reason that this animal has a very low body temperature, which makes them fit for catching the most virulent form of leprosy. They do not have a very strong immune system, due to which they are very compatible for such disease researches.

The nine banded armadillo is a very important animal in the research of various diseases. They have also become very important in the study of Hansen’s disease. This animal is very beneficial for mankind despite its awkward appearance.