The Himalayan Tahr, also known as kaarth, meshi, and taheer, is a species of grazing ungulates that are found in parts of the Himalayan mountain range. This large mammal is a relative of the wild goat and is specially adapted to life on the rugged mountain slopes of the Himalayas. Being vulnerable to hunting and habitat loss, this beautiful creature is undergoing a population decline and has already been declared as near threatened.

Size: The length of these tahrs can be anything between 90 and 140 cm.

Fur/hair/coat: They are double coated with dense, reddish to dark brown woolly coat, and a thick undercoat.

Horns: Both the sexes bear horns that can reach a maximum size of 46 cm. Horns in the female are smaller than the male. 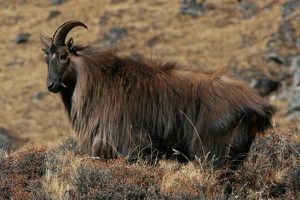 Feet: The sturdy, hooved feet and flexible enough to help them walk through the terrains.

Tail: The tail is small, measuring about 9 to 12 cm in length.

Sexual Dimorphism: The males are easily noticeable with their heavy ruff and mane that lack in the females.

The normal lifespan of the animal is 10 to 14 years (and up to 21-22 years in captivity), with the females tending to live longer.

They are mostly found in the mountain country and montane woodlands. In the winter, they come down to lower altitudes to avoid the deep snow, where they can get enough food, while, during summer, they tend to stay at higher elevations. No regional subspecies of the Himalayan Tahr has yet been described.

Habitat: Where do Himalayan Tahrs Live

Himalayan Tahr is native to the Himalayas in northern India, southern Tibet, northern Pakistan, and Nepal. 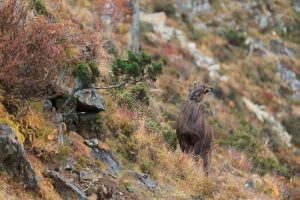 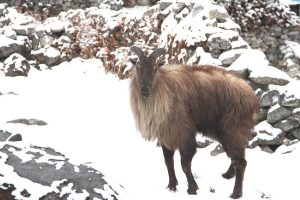 Himalayan Tahrs often live in groups of up to 80 members. However, these groups are all same-sex groups with all males or all females, except for the breeding season. Young Himalayan Tahrs that are less than two years are not allowed in the male groups. The groups of males are larger than those of the females. Apparently, there is no hierarchy or dominance present in the groups.

Himalayan Tahrs are diurnal, and are most active 3 to 4 hours after dawn and before dusk, while the remaining day, they usually rest. Interestingly, in the morning, these creatures move upslope and spend time relaxing there during the midday hours. After sunset, they move downslope and spend the entire night time there. This action of the HTs is called ‘daily vertical migration’.

Diet: What Do Himalayan Tahrs Eat

As a ruminant herbivore, the Himalayan Tahr would consume grasses, herbs, and the leaves from shrubs and trees.

The age of sexual maturity of the Himalayan Tahr is two years, while the breeding season falls between October and January, during when the males would engage in competition in order to get a partner and enjoy privileges. However, male tahrs that are less than the age of four years usually leave as the loser, failing to get a partner.

When pregnant, the mature females would leave their herds for giving birth to the young ones and would return after delivery. The gestation period of the female Himalayan Tahr is seven months, usually giving birth to a single kid, but at times twins.

The mother would immediately begin nursing the kids the moment they are born, while the baby would take around three to four hours to be able to stand on its legs and try to walk. The juveniles are weaned when they attain the age of six months, though they continue remaining with the mother for about two years more. 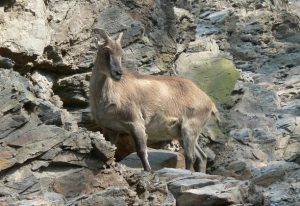 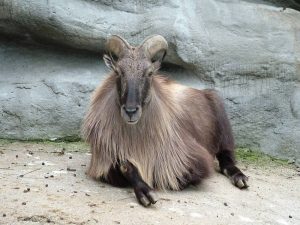 The Himalayan Tahr has been listed by the IUCN 3.1 under the category ‘NT’ or “Near Threatened”. 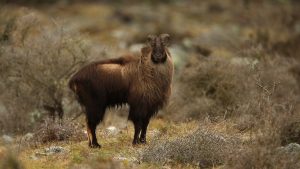 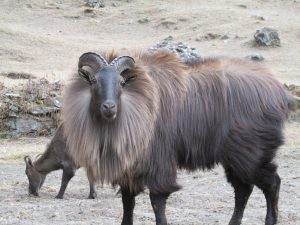