Scientifically, known as ‘Monachus schauinslandi’, the Hawaiian monk seal is an earless seal that is an endemic species of the Hawaiian Islands.

It belongs to the family ‘Phocidae’ or ‘true seals’ which also include the extinct Caribbean monk seal and the Mediterranean seal.

It has been named after H.H.Schauinslandi, a German scientist who discovered the first skull of the Hawaiian monk seal in the year 1899 on the Laysan Island.

In fact, it has been named as a monk owing to the growth of short hairs on its head. 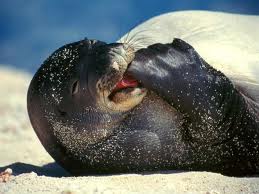 Like all other seals, Hawaiian monk seals are also pinnipeds, which mean that they are carnivorous by nature.

Scientific discoveries have revealed that the Hawaiian monk seals have been living in the oceanic waters surrounding the Hawaiian Islands for millions of years.

It is a product of convergent evolution. This suggests that it has evolved with time to adapt itself to the environment. The Hawaiian natives call it ‘Ilio-holo-i-ka-uaua’, which literally means the ‘dog that runs in rough water’ because it is usually seen to swim alone or in a very small group. They are considered to be the most primitive of all the living seals. But unfortunately, the number of seals has dwindled due to various anthropogenic activities. And the extent of such activities has gone to such an extent that these sea hunters face the danger of becoming extinct. This has given the vent to undertake measures to protect and conserve the species and so it is considered to be among the most endangered species of seals or mammals on earth.

Belonging to the family of ‘Phocidae’ or ‘true or earless seals’, the Hawaiian monk seals do not possess external ears and are unable to rotate their hind flippers under their body. Their distinct lineage of evolution and convergent nature has led them to be considered as ‘living fossil’.

They are characterized by relatively flat and small head, large and dark eyes, and eight pairs of teeth or cetacean teeth. They have nostrils on top of short snouts and also have whiskers on each side of the snout. Their belly is usually white and they naturally put over a grey coat.

Hawaiian monk seals have a very slender physique and a torpedo-shaped body which provides immense agility and flexibility to their body, thereby making them great swimmers. This makes them ideal marine hunters. 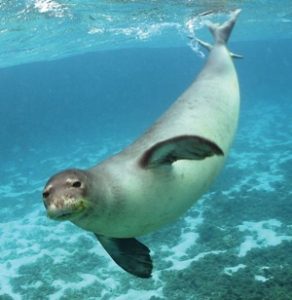 The average weight of Hawaiian monk seal pups may range from 30 to 40 pounds and they may be as long as 3 feet. But within 6 weeks, they may grow as heavy as 150 to 250 pounds. The size and weight of adult female Hawaiian monk seals is usually bigger and larger than their male counterparts. Females are usually 7 to 8 feet long and weigh around 400 to 600 pounds whereas males may reach upto 7 feet in length and may weigh around 300 to 400 pounds.

The pups are born with black pelage but with time it moults its colour to silver-gray. This moulting in pups usually occurs when they reach the end of their period of nursing by their mothers. They undergo catastrophic moulting for as long as 10 days while being exposed to sunlight and atmospheric conditions. This is manifested in their change of hair and skin colour. They usually survive for 25 to 30 years. But in many cases, they shrink in numbers due to poor nurturance of Hawaiian monk seal pups, wherein mothers abandon them during infancy.

The Hawaiian monk seals are highly introvert in terms of their dwellings and are therefore found in areas that are far away from human encroachment. They spend most of their time in the sea and when they are tired of hunting, they tend to rest on sandy beaches. Sandy beaches are in fact used by them as their breeding grounds. They spend most of their time foraging in deep water but also haul-out on corals, and volcanic rocks. 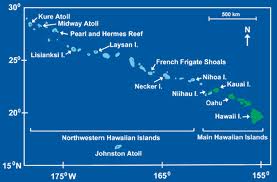 For those who want to know as to where do Hawaiian monks live must be acquainted with the fact that they are mostly to be seen in and around the Northwestern Hawaiian Islands (NWH). But they may also be found in small numbers on the Hawaiian Islands. They are mostly found to breed in areas and regions such as Kure Atoll, Laysan Islands, Pearl & Hermes Reef, French Frigate Shoals, Lisianski Islands, and the Midway Islands. In fact, most of them assemble around Papahanaumokuakea Marine National Monument and may also be found in small groups in and around the Nihoa and the Necker Islands, Maro Reef and Gardner Pinnacles. Hawaiian monk seals are quite intelligent enough to use fringe vegetation to protect themselves from nature’s fury and force and also from its enemies.

If one wants to know what do Hawaiian monk seals eat, one must be informed that their diet depends on the area where the seal lives and hovers around, how old or young is it and whether it is a male or a female. They are benthic foragers. These seals feed on bony fishes, crustaceans such as crabs, shrimps or lobsters and cephalopods like squids and molluscs. But for both Hawaiian monk seal pups and adults, smaller species of octopus and eels are the most favoured prey to relish. But occasionally, they may also hunt for birds and other smaller seals.

However, owing to their foraging capacity, they possess quite a diverse diet. They actually belong to the benthos community of marine organisms and pups usually look for creatures hidden in the sand or under the rocks. The adults on the other hand, hunt creatures at night in the dark. They are also known as Deep Sea Hunters as they can forage as deep as 1,000 feet or more under water.

The Hawaiian Monk seals have been in existence since millions of years, wherein the earth has witnessed enormous change and transformations. All organisms learn to adapt themselves to their changing circumstances and environmental conditions. Likewise these monk seals endemic to the Hawaiian Islands have acquired a very streamlined body to be more agile to swim faster. They have also developed thick layers of blubber, which acts as a superb insulator, provides greater buoyancy to the body for the purpose of swimming better with greater energy and vigour. This is also aided by the presence of flippers instead of limbs, which helps them glide easily through waves of water. Moreover, scientists have identified the internalization of their sensory and reproductive organs which prevents any harm while dragging to such important organs if they existed externally.

Swimming ability – They can dive as deep as 1000 feet and are able to hold their breath for as long as 20-25 minutes.

Heart Rate – They have the ability to reduce their rate of heartbeat to as low as 4 to 15 beats per minute as against 50 to 120 under normal circumstances. This phenomenon of conserving body oxygen is known as Bradycardia.

These monk seals are also quite aggressive by nature and they indulge in violent sexual activities with their partners. They are also known to try their masculine worms over female pups and sub-adults, confusing them as those that are able to breed. The practice of ‘mobbing’ which is a form of group sex conducted by males over ‘estrus’ females, takes place in breeding colonies boasting of poor sex ratio. This practice further aggravates the deteriorating sex ratio.

Hawaiian monk seals are born within a year of mating, usually in the month of late March and June. The birth rate varies individually but almost 60% of them give birth within a year. This is followed by a duration of around a month for proper nursing by the mother seal, wherein the mother fasts and remains onshore and this leads to a tremendous loss of weight. Once the period of nursing is over, the mother seal abandons her pups and ventures back into the sea. Females have also been observed to foster the offspring’s of similar species. 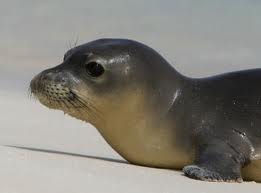 Within a year of mating, the female Hawaiian monk seals give birth to sweet and cute pups which are about 3 feet at birth and weigh around 35 pounds. Newborn pups are normally black in colour but moult and acquire a silvery paint once they are freed from their mother’s supervision. After weaning, the pups may have to lose weight in their quest for survival but shall regain the same once they master the art of foraging. The survival rate for these pups is quite high as compared to those of other seal species.

With phenomenal transformations in the natural environment since millions of years and the proliferation of anthropogenic activities which cause great harm to the environment, the population of Hawaiian monk seals has dwindled to such an extent that they face the threat of extinction. To one’s amazement, only as many as a 1,200 exist in the world today.

The natural factors responsible for shrinking population size of these Hawaiian seals include the natural elimination of the same by becoming a prey to Hawaiian monk seal predators such as sharks. Tiger sharks, which frequent the Hawaiian Islands, are considered to be the most dangerous predator. Moreover, the mating practice of mobbing also leads to the unfortunate death of female Hawaiian monk seals and pups due to septicemia. Marine debris entanglement is also a significant cause of the death of Hawaiian monk seals.

Human activities such as hunting, poaching, and casting nets for catching fishes are highly responsible for the poor population of Hawaiian monk seals. These innocent seals are hunted for their skin, meat and teeth. Moreover, the toxification of the sea and ocean waters caused due to human activities that are perilous to the health of living organisms. Harmful chemicals released into the sea may lead to its deposition inside fishes and other marine organisms such as Dinoflagellates, which when consumed by Hawaiian monk seals takes a heavy toll. Along with these factors, heavy erosion of the Northwest Hawaiian Islands and other breeding grounds also provides an answer to the question like why is the Hawaiian monk seal endangered, which is usually posed by all. Fasting during nurturance and mobbing during pregnancy also lead to unequal sex ratio of Hawaiian monk seals, thereby causing a severe decline in their population.

The Hawaiian monk seal threats posed by natural forces and human intervention have led to the endangering of the species. The International Union for Conservation of Nature and Natural Resources (IUCN) has listed it as a critically endangered species. It was designated as an endangered species on 23rd November, 1976 by the Endangered Species Act. They are also listed on Appendix I of the Convention on International trade in Endangered Species (CITES), thereby entailing International protection to the Hawaiian monk seals.

The best way to prevent the phenomenal decline in the population of Hawaiian monk seals and to conserve them is to acquire a greater knowledge of their lifestyle and the impact of the changing environment on them. This understanding entails the undertaking of highly comprehensive and scientific ways to control the proliferating human activities, which have created havoc for all living beings in the world. 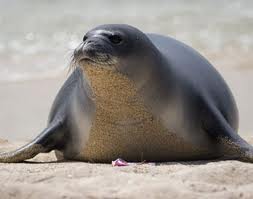 One must start from the grounds of educating the masses about the importance of these creatures in maintaining the Hawaiian monk seal food chain and the preservation of the ecosystem of the Hawaiian Islands. Some of the initiatives that have been undertaken by the International, national and individual organisations may be mentioned as the following:-

Although all such measures have proved quite efficient in its objectives yet, it is very important that just not organizations but individuals must undertake measures to protect these wonderful and unique creatures that have been dwelling on the laps of mother earth since millions of years.