The African clawed frog is a species of aquatic frogs native to Africa marked with some unique behavior. These frogs are nocturnal and not active during the day. They got their name from the sets of three clawed toes each on its hind feet. They belong to the Pipidae family, the members of which are without tongue and teeth. These frogs are not at all poisonous. 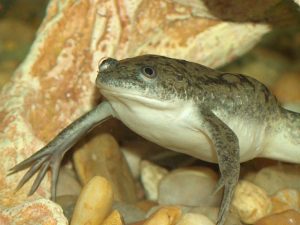 Physical Features: These species have a comparatively smaller head than their bodies. The frogs have a smooth, slippery body, and have no sign of visible ears. In place of movable eyelids, these frogs have a transparent covering to protect their eyes.

Weight: The male African clawed frog weighs around 60 grams (2 ounces), whereas the females of the species are heavier at around 200 grams (7 ounces).

Color: Their skin is marked with blotched stains of brown and olive gray. The underside of these frogs is cream white with a tinge of yellow. 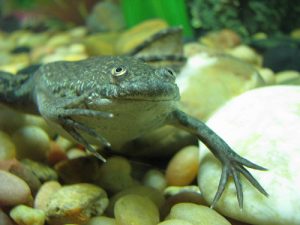 Feet: The front limbs of these frogs are small in size, having unwebbed fingers, which they use for pushing food into their mouth. Its hind limbs are larger and have webbed fingers. The three inside toes on both these feet have their tips resembling claws. Although, these are not true claws, but are cornified tips.

This species is seldom found in running streams. Their favorite places are quiet streams and warm stagnant pools. They can also withstand wide variations in the pH level in water, however, metal ions are toxic to them. 60 to 80 degrees Fahrenheit temperature is best suited for these frogs to thrive, and they would leave the water if only they are forced to migrate.

The African clawed frogs are aggressive and opportunistic hunters, and have a big appetite. They are carnivorous and a voracious eater. They eat up almost all that comes on their way, specially the babies of other frogs and aquatic animals. They are scavengers by nature and would feast upon anything living, dying or dead, including arthropods, organic wastes, larvae, worms, insects, small fish, crustaceans and snails.

To locate their food, they use their sensitive fingers, sense of smell and their lateral line system, which acts as a substitute to their lack of ears, helping them sense vibrations in the water. They use a hyobranchial pump to suck food into their mouths.

These creatures have often been seen practicing cannibalism. Cannibalism allows these frogs to colonize a water body, where there is not sufficient prey base for the adult frogs or, to continue living safely in a body of water from where prey has been depleted. 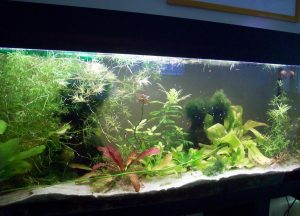 Unlike most other frog species, the male of this species cannot make a mating call, as they lack vocal cord. However, they can vocalize, generating a sound by rapid contractions of their intrinsic laryngeal muscles inside the throat. Females can also can answer vocally.

On an average, the life-span of these creatures ranges from 5–15 years. However, there are records showing some individuals of this species living up to 20–30 years.

The African clawed frogs shed their skin every season. Soon after shedding, these frogs eat their own shedded skin. 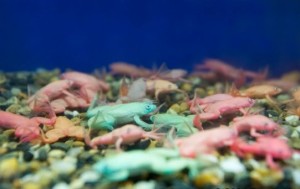 The African clawed frog does not hibernate.

Before mating, the males generate vibrating throat sounds, similar to mating calls of other frog species, and tries attracting females, which sounds very much similar to underwater cricket calls. 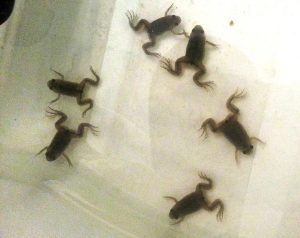 One can find distinct differences between the male and the female African clawed frogs. The male of the species is generally around 20% smaller than their female counterparts, with thinner legs and bodies. The females are heavier, with hip-like bulges above rear legs (where their eggs are located internally). Although, the females do not call like their males do, they can answer back by either accepting (by rapping) or rejecting (by ticking) the mating proposal. This phenomenon of female reciprocation is extremely rare in the animal kingdom. 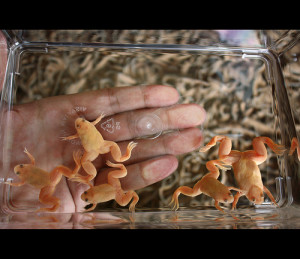 Both the sexes attain sexual maturity within 10 – 12 months. The mating season of these frogs is usually between early spring and late summer, however, it can take place at any time, up to four times, a year. Mating takes place usually at night time, with the male frog engaged in pelvic aplexus, clasping the female in the pelvic region. 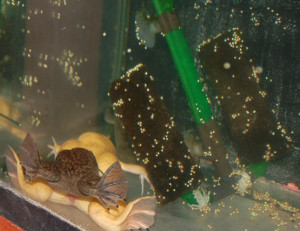 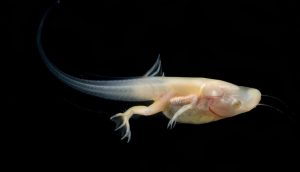 The parent frogs do not show any parental care to their young ones. The eggs of these creatures are around 0.4 cm (0.16 inches) in length. The gestation period of these tiny tadpoles is about 6 – 8 weeks. They are exclusively filter feeders. 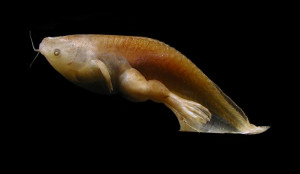 African clawed frogs are hardy and are handling them is as easy and simple as it is to take care of any aquarium fish. Try to buy African clawed frogs from somewhere where you can make sure that, they are free from any kind of diseases. This is because these frogs are facing a fatal and mass attack by a deadly amphibian fungus, named Chytrid fungus, which is probably being contributed by the pet trade.

Temperature and Lighting: No special variation in tank temperature or lighting is required for the African clawed frogs. Room temperatures ranging from 68-75° F (20-24° C) is enough for these creatures. However, it is preferable if there is indirect lighting in the ratio of 12-hour light:12-hour of dark light.

Filtration: Arranging for filtration in the tank of this pet is superfluous, as believed by some experts, because these frogs already possess the natural sensory system (lateral line), and using filters might constantly produce stressful stimuli to these frogs. However, a gentle filtration can be used to keep the aquarium water clean. If there is no filtration, the water should completely be changed almost every week.

Feeding: African clawed frogs consume different kinds of foods- living or not. Foods from different kinds of worms, to cat and dog foods, feeder fish, brine shrimps etc. can all be used to feed them. Mostly, they can be fed 3-4 times a week.

Tank Mate: Frogs and fish do not have compatibility with each other. These frogs attack and eat almost all fish, which are of its size or smaller. Fish like cichlid, and predatory fish like bichir might not be safe for these frogs.

Unlike most frogs, the African clawed frog can survive in water with high salinity too.

These creatures have a high tolerance to its environmental changes, and can survive in nearly any body of water, ranging from desert oases to ice-covered lakes.

During the time of the year, when the pond dries up, these frogs lay dormant underground in burrows in the mud and may live there for up to a year. 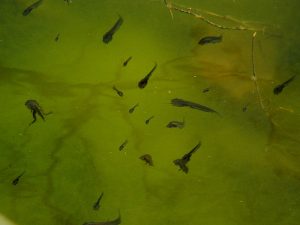 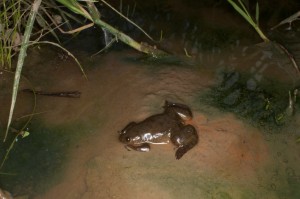 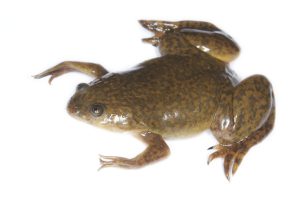