The ratel or honey badger is one such animal that’s fearless and ferocious attitude have earned them a position even in the Guinness Book of Records! So much so that this species of mustelids have often been compared with the lion for its courage. It is not a wonder that these mammals do not have many predators chiefly because of their ferocious defensive abilities and the thick skin that can withstand even a bee’s sting.

The notoriously fearless Ratel attacks its component enemy without even considering the size of the other animal or its own chances of escape.

It happens to be the only member of the genus Mellivora. 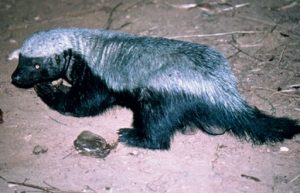 Ratels are mammals that are somewhat like the badger.

Size: Adults are roughly around 68-75 centimeters long. The females are slightly smaller than the males. Size wise the ratel is often compared with the European Badger.

Weight: Males are known to weigh somewhere around 12 to 16 kilograms while females measure 9.1 kilograms in approximate.

Skull: The honey badger has a thick skull that is solidly built and without a single independent bone structure. Ratel enthusiasts have compared the skull and stated it to be a larger version of that of a marbled polecat.  The skull measures about 13.9-14.5 centimeters in males and 13 centimeters in the case of females.

Color: Their thick coat of fur is silvery white on the upper part of the animal’s body; although it is distinguishably black in the lower parts.

Eyes: It has small eyes.

Ears: One may note that this animal does not have external ears. Rather its ears are enclosed in the skin and look like ridges on the skin. However, there is a small opening which the animal can close while it is engrossed in activities like digging the ground.

Limbs: This animal has short legs that are really strong and sturdy. There are five toes in each foot; the long, sharp claws of this animal are roughly 350-400 millimeters long and help them to dig the ground.

bIt ha s a short tail that is covered with furry hairs.

These animals prefer arid grasslands, high forests, moist savannas and semi-desert habitats. They can tolerate both wet and dry habitats. 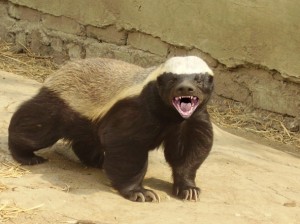 Honey badgers are common through most of Sub-Saharan Africa right from the Western Cape, to southern Morocco as well as southwestern Algeria. These animals are also found in Arabia, Iran and the western regions of Asia like Turkmenistan and to the Indian Peninsula.

Ratels are basically omnivores but their reputation of being fierce hunters has entitled them to be carnivorous. As such their diet comprises of a variety of prey including small rodents, birds, fish, eggs, reptiles especially snakes, tortoises and frogs. They do not hesitate to feed on fruits and vegetables like roots and berries also.

However, like its name suggests, the honey badger loves honey.

The male and female ratels mate inside their burrows. The gestation period lasts for 6 months. Females give birth to 1-4 cubs. The young ones are very much dependent on their mother for food and shelter. As they begin to grow the mother digs new burrows to hide the cubs while the elders go to hunt. It is mainly during this phase when there are ample chances for the cubs to fall victim to deadly predators; many a time the poor cubs get eaten by other ratels.

The ones who survive eventually learn and acquire hunting skills from their mothers.

Ratels are solitary creatures that are only found in groups or pairs while hunting and during the breeding season. Those living in proximity to the human population have been observed to be highly nocturnal or active only at night time. However, the ones living in the wild are diurnal or mostly active during the day.

These animals live in burrows or self-dug holes. Ratels are excellent diggers; their burrows are barely 1-3 meters in length with a single passage and nesting chamber. 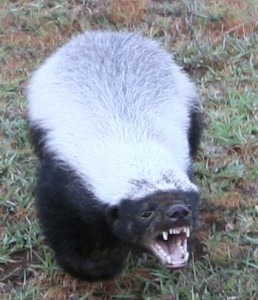 It is almost as if ratels work in cooperation with the small bird known as the Honey Guide. Honey Guides are experts in tracking bee nests and like we all know ratels love honey. The song of the Honey Guide is a major signal to the ratel that a bees nest has been discovered. After locating the nest the ratel either removes the rocks out of the way or tear opens the tree trunk to get the bees nest. The end outcome is both benefit as the ratel gets its share of honey and the Honey Guide gets the bee grubs and honey combs. This is when the foul smell from the anal glands of the ratel comes handy to calm the angry bees and put them to sleep.

The intelligence of the honey badger has astonished researchers. This animal is amongst the few species that can use tools like rocks or logs. A certain documentary shows a ratel rolling a log in order to stand on it and reaching out to a Kingfisher bird that was its target hunt.

Ratels have reputation for being extremely fearless and tough animals. So much so that they will go on to attack their strongest enemies even when escape is impossible. Their almost endless energy exposed during combats is capable of wearing out even really large animals.

These animals produce a hoarse “khrya-ya-ya-ya” sound. However, they tend to scream like bear cubs when attacked by dogs.

The ratel can live up to 25 years in the wild.

The ratel is not an endangered species; as such it is not listed as so on the International Red Data List (IUCN 2001).

Here are some pictures of the aggressive animal known as the ratel or honeybadger. 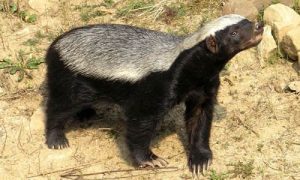 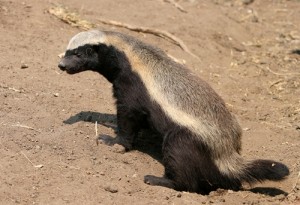